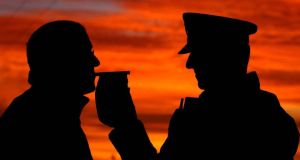 Breath test: the Bill before the Dáil introduces a mandatory ban for a first drink-driving offence if a motorist has a blood alcohol level of more than 50mg per 100ml. Photograph: John Giles/PA Wire

TDs who hold up road-safety legislation are behaving in a “disgraceful and self-serving” way, according to the Road Safety Authority’s chairwoman, Liz O’Donnell.

The Road Traffic (Amendment) Bill, currently before the Dáil, introduces a mandatory driving ban for a first drink-driving offence if a motorist has a blood alcohol level of more than 50mg per 100ml. First-time offenders with readings of between 50mg and 80mg currently receive fines and penalty points. The legislation will also penalise vehicle owners who allow learners to drive alone and enable the Garda to seize any vehicle driven by an unaccompanied learner driver.

The Independent Alliance TD Seán Canney voted against his group’s drink-driving proposals in the Bill in the Dáil on Tuesday night.

“These TDs are dominating the discussion on the Road Traffic (Amendment) Bill,” Ms O’Donnell said. “What should have been a straightforward passage of the Bill at this stage has descended into farce and filibuster.”

She accused them of using delaying tactics that are in turn holding up other legislation. “This is an unprecedented situation, and the delaying tactics being employed by these deputies is putting at risk the introduction of important measures to save lives on the road. Quite simply it’s costing lives.”

Ms O’Donnell said the TDs are showing “utter contempt” for road safety and are not reflecting the views of rural Ireland. “I would call on these deputies to desist from these irresponsible and selfish tactics impeding the passage of the Bill. The Bill should have been across the line weeks ago and already saving lives.”