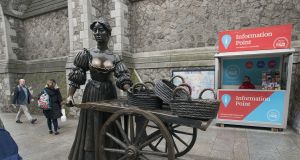 Molly Malone’s voice will echo over the streets of Dublin, as her statue on Suffolk Street becomes the latest addition to the talking statues initiative for Dublin.

The Molly Malone statue will be given a voice by US student, Michaela McMahon, who won a public competition to write the words spoken by it. Her winning script will be narrated by actor and singer Maria Doyle Kennedy.

The news marks the latest development in the talking statues project, a Fáilte Ireland initiative which was officially launched in Dublin on Wednesday.

The project gives some of the city’s best-known landmarks a digital voice.

People can use their mobile phones to listen to Irish actors such as Ruth Negga and Brendan O’Carroll reciting monologues attributed to 11 of Dublin’s most prominent statues.

The James Joyce statue is voiced by Stephen Rea and the Wolfe Tone statue by Brendan Gleeson.

Ms McMahon, who was studying in UCC at the time of the competition, said it was a challenge to come up with the words Molly might say.

“I had to try and solve different challenges with this project: how do you write from the perspective of a figure who is more of an amalgamation or symbol, and how do you do that in a way that catches the attention of the public? I thought that it would be an interesting piece to try and create. Most of the other statues involved in the project are commemorations of real people, which means that there is a wealth of information to draw upon,” she said.

“The song Molly Malone is really the only time that we picture her, so I tried to make her character a little more defined for people, to make her more than the girl in the song,” she added.

Lord Mayor of Dublin Nial Ring said Molly Malone is part of the fabric of the city and “one of our most iconic historical figures”.

“Her struggles, hardships and endurance are world-renowned and now, for the first time in over 300 years, Dubliners and visitors alike will once again hear her voice ring through the streets of Dublin. The Molly Malone statue was one of our original ‘moving statues’ – now she is one of our first ‘talking statues’,” said Mr Ring.

“I’m not sure what I wait for. In life, I would dangle my pale feet off the wharf towards the dark Liffey while waiting for the tide to carry the bright-hulled fishing boats in. I sold my goods on the noisy streets of Dublin. And I would have continued, if I hadn’t fallen ill. Even the smallest illness was serious.

Dublin is different now. So many streets. And at one time I knew them all. They are like rivers you know. People flow much like water, ambling aimlessly, or hurrying down Grafton purposefully; eddies of people swirling past like the Liffey after a cleansing rain. And my little street in the middle of it all.

Quite exciting. And dizzying somehow. I never want for company. People can be a little too familiar with me though – not my fault I’m stuck in this dress. I certainly didn’t choose it. The things people do sometimes, and all in the shadow of a church!

If I could move – well. I do like visitors though, when people are polite, and do not take endless selfies. I would take pictures for them if they asked. And if I could. I smile a little when someone walks by humming the song – ‘Alive, alive, oh.’ Funny how I ended up in a song. I wish I could ask for flowers – any type really. You miss little things while on a plinth.

I can still tell you with certainty where to find the best seafood in Dublin. Immobility means nothing in that case. Just don’t ask me what I think of mussels. People watching – a favourite from my perch, as it was when I pushed my cart. I like my rock amongst the river. Dublin is a good place to rest.”