‘Hate crime has no place in today’s Ireland,’ says Archbishop 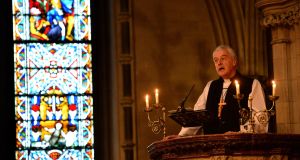 Church of Ireland Archbishop of Dublin Michael Jackson has condemned recent incidents in which Muslim people were targeted in Ireland.

In a letter to imams and leaders of mosques and Muslim centres in Dublin he said that “on behalf of the Church of Ireland community I wish to express our sorrow and our solidarity to all who have suffered trauma and injury resulting from acts of hatred that have no place in our society”.

Timed to coincide with the Jumu’ah Prayer in mosques on Friday (tomorrow), the letter follows a number of incidents this month in which members of the Muslim community were targeted.

Responding to a call from Muslim leaders, Archbishop Jackson has urged all Irish citizens to take a stand against prejudice and racism. “Recent events which have taken place in relation to those of cultures and faiths other than the majority culture in Ireland must be condemned.

“Our sympathy for those who are attacked and humiliated, by action and by word, has to be our priority. So too has a sense of shame at the acts perpetrated against these people with entitled cruelty leading to individual humiliation and personal violation. Hate crime has no place in today’s Ireland,” he said.

“We hear the voice of concern raised by our neighbours who are members of Muslim communities in Ireland and urge all Irish citizens to stand against prejudice directed against minorities in whatever form they find it and in whatever way they feel they can. Friendship and hospitality march hand in hand with justice and compassion,” he said.

Meanwhile, a new Church of Ireland Bishop of Derry and Raphoe has been elected to succeed Bishop Ken Good, who retired last May.

Archdeacon Andrew Forster (52) has been rector of Drumglass (Dungannon) in the Armagh archdiocese since 2007 and Archdeacon of Ardboe since 2015.

He was previously rector of Drumcliffe, Co Sligo, and Archdeacon of Elphin and Ardagh from 2002 to 2007 and, prior to that, Church of Ireland chaplain and Dean of Residence at Queen’s University Belfast from 1995 to 2002.

He was curate at Willowfield parish in Belfast from ordination in 1992 until 1995. Married to Heather, they have three children.