Prestigious Catholic theology award to be presented to Mary McAleese 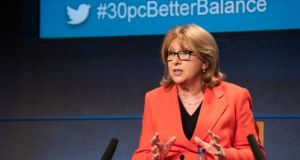 Former president Mary McAleese is to be presented with one of the most prestigious prizes in the Catholic world for her 500,000-word doctoral thesis on ‘Children’s Rights and Obligations in Canon Law’, completed last year.

She will be presented with the Alfons Auer Ethics Award 2019 at the University of Tubingen in Germany next October. Valued at €25,000 and first presented in 2015, it is seen as Europe’s most prestigious prize for leading Catholics.

Presented every two years it is named after the late Rev Prof Alfons Auer, formerly of the Catholic Theology Faculty at Tubingen, who died in 2005. One of the most influential liberal Catholic moral theologians following the Second Vatican Council, his contemporaries at Tubingen at one time included Pope Benedict and Prof Hans Kung.

The commendation honouring Mrs McAleese at the University on October 30th next will be by Dr Hille Haker, Professor of Theological Ethics at Loyola University, Chicago.

Currently Prof of Children, Religion and Law at the University of Glasgow, Mrs McAleese publicly defended her doctoral thesis, on which she had worked for four years, at the Gregorian University in Rome last September.

She did so in Italian, for about 90 minutes, before a three-man panel of priest academics. The audience included Archbishop of Dublin Diarmuid Martin, Rector of the Irish College in Rome Msgr Ciarán O’Carroll, and the Irish Ambassador to Italy Colm Ó Floinn.

Her thesis is due to be published in book form by Brill, the international human rights law publishers, next November. It is described as the first study of its kind “which subjects to comprehensive scrutiny the Roman Catholic Church’s 1983 Code of Canon law as it applies to children”.

It also deals with “the 1989 United Nations Convention on the Rights of the Child to which the Holy See is State Party” and how this is adhered to by Rome.

The publisher notes how Mrs McAleese’s analysis “charts a distinct and worrying sea-change in the attitude of the Holy See to its obligations under the (UN) Convention since the clerical sex abuse scandals became a subject of discussion at the Committee on the Rights of the Child, which monitors implementation of the Convention”.

To mark Mrs McAleese’s receipt of the award a public conversation between the former president and renowned American Benedictine nun Sr Joan Chittister will take place in Trinity College, Dublin at 2pm on Saturday, November 2nd.

Sr Chittister (83) is a theologian, author and has been a passionate advocate for women’s rights for over 50 years. Last month she was “disinvited” from speaking at a Catholic education conference in Melbourne, Australia, apparently because of her liberal views.

The public conversation at Trinity is being organised by the We Are Church Ireland group, Voices of Faith, the international organisation set up to promote the leadership of women in the Catholic Church, and Trinity’s School of Religion.