Can a major new plan revive the coastal town of Balbriggan? 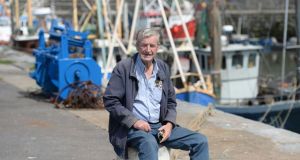 Fred Hammond points up at a grubby apartment block from his makeshift seat on a pile of fishing nets and wonders how it was allowed to be built.

It rose over Balbriggan’s famous 19th-century railway viaduct during the Celtic Tiger building frenzy. While Hammond bemoans its appearance, it symbolises much about this north Dublin community – a rapidly evolving environment in stark contrast with the past.

“Thousands and thousands of houses built over the past 20 years. The population has trebled – too quick, too fast,” Hammond says, cupping a cigarette as he stands beside a row of fish containers at the end of the harbour.

“Do you ever listen to the news? It’s the fastest growing town in Europe, they say.”

Today plans are in motion to bridle Balbriggan’s runaway growth before it gets out of control and Hammond, like many of the older generation, is perfectly placed to set the context.

Born during the second World War, he worked the fishing boats for decades, landing prawns and razor clams. He can talk about the bustling main street of the past, its 11 pubs and two cinemas, and the local factories on which the economy was built. It is all different now, he says: “I wouldn’t know anybody in the town.”

His memories may be tinged with nostalgia, but Hammond’s convictions are widely held. Fingal County Council recently launched a major investment strategy, worth up to €50 million, aimed at resolving faltering integration and dearth of activities for those who live here. Its success or failure will be keenly observed by other towns with similar problems on lesser scales.

Balbriggan’s 21st-century story is best told in numbers. Since its days as an industrial textile centre, it has undergone extraordinary change; a surge in housing and population clashed head-on with a lack of well-paid jobs and local investment.

The population has grown to 24,600 since 1991, a 194 per cent increase compared with a national average of 35 per cent. It claims considerable ethnic diversity (some 28 per cent of its residents were born outside the country) and the moniker “Ireland’s youngest town” (average age: 30.8 years old).

“I think we are being carefully watched,” says Maurice O’Halloran, chief executive of the local chamber of commerce and a central player in Our Balbriggan, the rejuvenation plan spanning seven years to 2025.

“If this works, you are going to see other people coming here to see how it worked, what are the results.”

It’s a town where there are small pay packets; there is no Google here

On a long looped tour of the area, O’Halloran shows how they intend to connect the investment dots from the Stephenstown Industrial Estate in the south to the labyrinthine housing estates in the north.

The strategy is based on four broad pillars, but with a distinct focus on reinvigorating the main street, opening up the town to link its postcard harbour and beach with the urban centre, and developing social infrastructure and amenities, notably a swimming pool.

The priorities were drawn up following a local survey completed by 4,000 people or about a quarter of the population – the level of interest is held as a badge of honour among planners – as well as community meetings and engagement. If actual achievements are a way off yet, there is an energy.

Improving integration between the various communities and increasing local, well-paid employment are also considered vital components of the overhaul. According to O’Halloran, the theory is that by improving individual circumstances, you improve everything.

“It’s a town where there are small pay packets; there is no Google here. There are none of these big industries that pay the big salaries,” he says, explaining that 8,500 working age people live in an area with 3,500 jobs.

Much hope lies in Stephenstown, a small network of industrial premises skirting the town centre. Although some of the glass-fronted buildings have been empty since the recession, O’Halloran and others are confident of a “bonanza” in interest from Northern Ireland companies in the event the UK crashes out of the EU later this year.

Many people in the town say Balbriggan has been historically ignored when it came to investment – losing out to more prosperous coastal areas. The feeling hangs in the air along the “main street” – a collective term for Drogheda Street, Bridge Street and Dublin Street that form its spine. Almost 3,000 people or 73 per cent of survey respondents identified this as an urgent investment priority.

“If they don’t turn it around quick, there won’t be many of us left,” says Sean Browne, a butcher who has been based here since 1963. His son, Martin, had planned to take over but isn’t sure the strategy can be executed quickly enough to make that version of the future viable. He stands cutting meat on a thick traditional rosewood butcher’s table underneath rows of framed award certificates. The two men address their customers by name.

“People used to come in three, four days a week and get their meat but that doesn’t happen any more,” Martin says.

The decay of urban retail has been a long time in the making and is by no means a local issue. In fact, Balbriggan’s centre, for all the complaints, seems busy. Tony Murphy, an Independent councillor and optimistic backer of the development plan, is resigned to this change in consumer behaviour, but says restoring the main street as a central, communal area is important in a town whose identity has shifted much in recent years.

“We don’t have a central-focused area that’s ripe for people to meet and greet,” he says.

Near the old courthouse, there are plans for the local authority to buy out a small row of closed businesses – the boarded-up former Ennis’s bar and nearby Salt & Pepper restaurant – with about two acres of land behind. It is an investment that would help carve open an artery from the nearby Millpond parkland down to the harbour which, although picturesque, is slightly isolated from pedestrian traffic.

Down there, where fishing boats are separated by a stone wall from the beach, there are further suggested plans for the local authority to acquire and transform a harbour bar and nightclub, and to run a greenway north to the 16th-century Bremore Castle and surrounding park that many see as the town’s best opportunity to attract visitors.

But there is more to the rejuvenation plan than a shot in the arm of commercial and leisure activity. Much of the pressing needs revolve around a spread of housing estates and a lack of facilities for those who live in them.

Balbriggan’s surrounding or “rural” electoral district has grown dramatically – it now accounts for 67 per cent of the population and comprises new estates like Moylaragh and Flemington to the northeast and Castleland to the south.

The expansion is put down to the Celtic Tiger property machine where land was cheap and home buyers could find something affordable, whether as an investment or stepping stone.

“Instead of building communities, they built houses,” notes Independent councillor Gráinne Maguire, another of those backing the strategy.

It’s such a young town as well and it’s growing so rapidly... it was lacking so much

Others support her view. Housing developments sprang up quickly and proliferated but with a lack of facilities or amenities. It has fed local concerns about perceived “gangs” with nowhere to go, and about quality of life. It also props up the long-held belief that Balbriggan has been bypassed in favour of sibling towns.

“It’s such a young town as well and it’s growing so rapidly... it was lacking so much,” says Prof Brian MacCraith, president of Dublin City University and the man brought in to chair the Balbriggan Leadership Group which spearheaded the strategy.

For Balbriggan, there is a commitment to deliver 20 tangible objectives this year, ranging from the apparently straightforward installation of lighting under the giant viaduct arches to the more complicated pursuit of “inward investment and jobs”.

There are those who believe setting out such specific targets will “put their heads in a noose”, while others feel it demonstrates the sheer force of will behind the strategy.

“The reason I got involved with this was because there was an attempt to make it happen,” says MacCraith.

“We knew people can be cynical about these kinds of things and that [is why] it needs some sort of confidence building at an early stage.”

He is confident the scheme will become a model for others, likening the build-up process to a “citizens’ assembly for urban regeneration”.

“There is a recognition that if we don’t invest and plan around this, it could go the other way,” he says.

On a sunny afternoon Laura and Gigi Balan stroll with their granddaughter along the harbour. Originally from Romania, they have lived here for 15 years and chat contentedly about life in the town.

They know about the strategy and say a swimming pool and more jobs would be welcome. Laura remembers when they moved here first and how her eldest son had nothing to do with his friends.

“Now it’s a bit better,” she smiles, with a nod toward the possibility of change, before setting off down the pier towards the fishing boats.