‘Family in Ireland has complexities it didn’t have heretofore,’ says Archbishop of Vienna 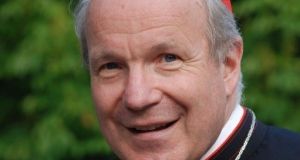 One of Rome’s most influential Cardinals has said that the Church must show mercy in the context of new and more complex situations of family life in Ireland today.

Archbishop of Vienna Cardinal Christoph Schönborn, who presented Pope Francis’s exhortation Amoris Laetitia (the Joy of Love) at a Vatican press conference in April 2016, has said “Ireland is synonymous with family, a country that traditionally has had family at its core.”

However, he said that “like most western nations, in particular, family in Ireland has complexities that it didn’t have heretofore.

“Second unions, divorce, same-sex unions; these are all part of a new narrative around the family in Ireland. So there is a lot of change and the Church must show mercy in the context of that change; it must be willing to meet families where they are today,” the cardinal said.

“Ultimately, and this is certainly the case with Ireland, for all the crises in the institution of marriage, as Amoris Latetia states, the desire to marry and form a family remains vibrant, especially among young people.”

Amoris Laetitia, followed a two- part synod of bishops in Rome on the family, in 2014 and 2015, and argued against rigidity when it came to admitting to Communion divorced and/or remarried couples. It urged, instead, a case-by-case examination of each situation.

Presenting the exhortation, the cardinal emphasised the Pope’s words that “the way of the church is not to condemn anyone forever . . .”

He will address a conference at Mary Immaculate College Limerick on Thursday next, under theme ‘Let’s Talk Family: Let’s Be Family.’

It is the first major conference to be held as part of a build up to the World Meeting of Families in Dublin next year and which it is expected will be attended by Pope Francis.

“While it (Amoris Laetitia) does not herald doctrinal change, it most definitely encourages greater discernment on the part of the Church when it comes to sensitivities around family today,” Cardinal Schönborn said in advance of his Limerick visit.

It meant “we as ministers must listen like perhaps we haven’t before and listen to all. To people in both regular and ‘so-called’ irregular relationships,” he said.

“Society has been founded on marriage and the weakening of family will pose a threat to individuals, to community values and, as Amoris states, the moral progress of cities and countries.

“Reinvigorating family is perhaps our great mission today. The Church’s way is the way of Jesus and that is a way of mercy and reinstatement,” he said.