Ireland has one of highest rates of female homelessness

Academic says figures do not include residents of domestic violence centres 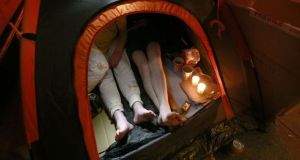 Research shows women are less likely to register as homeless over a fear of being stigmatised.

The current homeless figures are inaccurate as they do not include women and children in domestic violence refuges, a leading academic has said.

Dr Paula Mayock of Trinity College Dublin is co-author of a new study which reveals that women account for more than four in ten homeless adults in the State, with almost half of those in Dublin.

The study – ‘Women’s Homelessness in Europe’ – finds that women comprise 42 per cent of the total adult homeless population in the State with Dublin accounting for 47 per cent.

In France it stands at 38 per cent, Sweden 34 per cent while Poland and Denmark are at 24 per cent.

Dr Mayock told RTÉ’s Morning Ireland that figures for the number of homeless women are also inaccurate as they do not take into account the number of women in domestic violence refuges.

In 2014 there were 1,658 woman and over 2,000 children in domestic refuges. These women are not considered homeless under Irish government statistics while they are included in other European countries.

Dr Mayock also expressed concern about “family hubs” which she described as “congregate living”. They are not a sustainable or acceptable solution she said. The current rate of building and supply would indicate that they will be used as a substitute for some time while their effectiveness has yet to be determined.

The report says the true overall picture is likely to be even worse as women are less likely to register as homeless for fear of being stigmatised.

The study says that last year, almost two-thirds of homeless family households were headed by lone mothers aged in their 20s or 30s, who became homeless after losing privately rented housing.

The authors cite a separate study of 60 homeless women which found that two-thirds had experienced intimate partner violence.

They say research in several EU countries, including Ireland, reveals women’s distrust of services and their staff, often due to a perception that their autonomy and decision-making capacities are ignored.

It points to strong evidence that services are failing to respond adequately to the needs of women and says policy must stop prioritising male breadwinners over lone mothers.

The study also recommends giving urgent attention to providing affordable and appropriate housing for homeless women and their children.