Housing crisis to escalate over next five years, academics warn 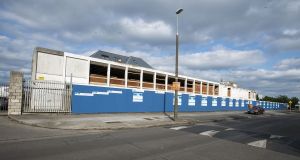 The old Bargaintown building on Greencastle Parade, Coolock, which is being converted to a family hub for homeless people. Photograph: Dave Meehan

The housing crisis has not yet peaked and is likely to escalate over the next five years, a Maynooth University study published this morning warns.

The study says the newly established “family hubs” – group accommodation provided to get homeless families out of hotels and B&Bs – could become the next “direct provision” for poor families.

It says the “major reliance” of successive governments on the private sector to provide social housing has contributed to the problems now facing the State.

The study, Investing in the Right to a Home: Housing, HAPs and Hubs, was written by Dr Rory Hearne and Dr Mary Murphy of the university’s sociology and social sciences institute. It was conducted as part of a Europe-wide examination of how to strengthen social investment.

The report describes a “core tension within Irish housing and economic policy” with one trying to address the social housing crisis and the latter “encouraging and relying on the private market” to deliver investment in housing.

While the private sector may deliver investment, it cannot distribute housing in a way that vindicates the rights of the poorest households. It calls for a tripling of State funding for social housing building to €1 billion a year.

“Absence of [State] investment in social housing negates the housing rights of the most vulnerable,” it says. “We are not at the peak of the housing crisis and we expect [it] to escalate over the next five years.”

It says the Housing Assistance Payment (HAP), a payment to households on the social housing list but living in the private rented sector, “is not a valid mechanism to meet the right to housing”. While HAP is a valid housing option it should be secondary option for households in need of social housing, while direct local authority or approved housing body social housing should be prioritised.

“While we make this argument from a security of tenure perspective we also note that from a cost perspective that direct build social housing presents a far greater return on State investment and is thus a more cost-efficient policy.”

Concerns about the lack of research or evidence to “justify the emerging family hubs model” are noted, and the lack of any pilot to show how they might work.

Minister for Housing Eoghan Murphy has said places for 650 homeless families, currently in hotels or B&Bs, will be provided, with another 200 places planned for families who are yet to become homeless. Such hubs provide cooking and laundry facilities, as well as homework clubs and on-site key workers.

“The danger with ‘hubs’ is that they both institutionalise and reduce the functioning capacity of families.” This can lead to “therapeutic incarceration” and lead to society blaming the families – predominantly lone-parent mothers, working class and migrant women – for something they did not cause.

“There is a real danger family ‘hubs’ may become the next ‘direct provision’ – an addition to Ireland’s long lamentable experiences of institutional responses to social [issues].”

The report calls for a three-month limit on how long families stay in hubs and a commitment to close all hubs by December 2019.

It says HAP tenancies should have be for minimum of five years and local authorities should be obliged to re-accommodate families which lose their HAP tenancy.