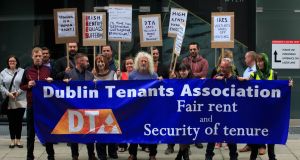 A small protest was held by a grassroots tenant-support group on Wednesday afternoon outside the head offices of the State’s largest private landlord.

Members of the Dublin Tenants Association (DTA) – which advocates on behalf of tenants in the private rental market – picketed outside the offices of Ires Reit on Grand Canal Dock, ahead of the launch later this month of The Maple in Sandyford, the firm’s latest development.

The association protested over what it called “escalating rents” and “the wider issue of Government-supported vulture-fund activity in Dublin’s crisis-hit housing market”.

The property management fund has acquired at least half of its properties from Nama.

Patrick Nelis, a tenant in one of the fund’s Tallaght properties, said he had suffered two attempted evictions, both of which were found to be invalid by the Residential Tenancies Board.

“It’s time for tenants to stand up to a vulture fund coming into our country and bullying us,” he said.

A spokesman for the property fund said it had been seeking to “professionalise” the whole sector.

“They [Ires Reit] want to bring a new approach to it and a much higher level of service to the sector. They have made a significant investment but they are not a vulture fund by any standard. They are committed to Ireland for the very long-term,” he said.

“For them, it has been about building new apartments and seeking to play their role in the housing shortage.”

He denied any allegations of tenants being bullied.

“The vast majority of Ires tenants would be very happy with the service that is provided. Their response to any of [their] tenants’ issues is extraordinary,” added the spokesman.

“The real big scandal in this is the prices that Ires Reit are charging on their new properties and why has the Government allowed this to happen. To allow the whole thing to disintegrate in how we supply our housing,” said Mr Wallace.

“The Government’s failure to address housing in Ireland is an absolute disgrace.”

The 68-unit Maple development will have starting rents of €1,925-a-month for a one-bedroom property, rising to €2,750-a-month for three-bedroom units.