US swimmer who has so far raised €3,000 ended his 32-day lone swim in Limerick 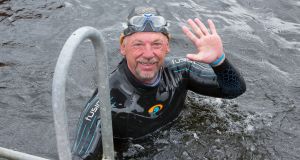 Dean Hall arrives at the jetty in Limerick city: he was diagnosed with lymphoma and leukaemia in 2013 but is now in remission. Photograph: Liam Burke/Press 22

A cancer survivor who completed his 240km charity swim of the river Shannon on Friday has vowed to “find another river” to continue his fundraising efforts.

Dean Hall (57) from Oregon in the US completed his 32-day lone swim at Arthur’s Quay, Limerick, having begun on June 5th, on the northern shore of Lough Allen in Co Leitrim.

Upon reaching dry land at the end of the journey, which saw him swim up to three marathon distances every day, Mr Hall said, “I feel fantastic – can I do it again?”

In 2013, Mr Hall was diagnosed with lymphoma and leukaemia. He had lost his first wife to brain cancer. He said he took to the water to clear his head.

“I knew that having a purpose or a dream could [help] bring me back to life,” he said. He is currently in full remission.

Despite protests from his doctors, who feared for his weakened immune system, in 2014 he became the first cancer patient to swim the 300km-long Willamette river in his home state.

He was welcomed in Limerick by Maria Jean Geary and her son TJ (9) who has recovered after being diagnosed with neuroblastoma when he was five months old. After undergoing “several rounds of chemo” to shrink the tumour, it was eventually surgically removed shortly before his first birthday.

“It raises awareness of children with cancer. They have different needs than adults with cancer and it’s not something that is often thought about when we talk about cancer strategies,” she said.

Mr Hall hopes to continue spreading a message of hope for other cancer patients and fundraising for cancer services. “Maybe next time we’ll go to New Zealand,” he said.