Archbishop of Dublin asks Taoiseach to give ‘clear, courageous’ leadership at this time 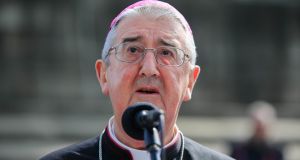 The murder of Lyra McKee in Derry on Thursday night calls for “clear, courageous and unfailing leadership,” Catholic Archbishop of Dublin Diarmuid has said.

Speaking to Taoiseach Leo Varadkar on Friday, who was attending the annual Good Friday ‘Way of the Cross ’event in Dublin’s Phoenix Park, Archbishop Martin said “people don’t want to see this, which is like the worst nightmare that we could have after years of peace in Northern Ireland”.

“Let’s all pray intensely that this incident will be just for once and never again.Violence only leads to violence. It’s a blind alley.”

Speaking to The Irish Times earlier, Archbishop Martin said that “what happened in Derry, the whole incident, the whole activity is very worrying, very troubling. The fact that somebody is dead, the circumstances in which we hear of the death – somebody simply coming out and firing into the crowd – what exactly is the ambition of people like this? What do they want?”

He noted how “of course all this is taking place in a situation in which the institutions are not working”.

The current political vacuum in Northern Ireland, he said “is not helping it”.

He wondered about speculated links between such activities and the current spate of ATM raids.

“I’ve been asking that. It’s one of the questions. That’s going back to older days. I don’t know what sort of intelligence people have and who within the community can smooth this out.”

The Catholic Bishop of Derry Donal MCKeown said that “there is a deep air of sadness hanging over this city. The murder of journalist Lyra McKee is causing widespread shock and revulsion. Our first thoughts and prayers are with Ms McKee’s family and friends who are terribly grieved by her killing.”

He said “you cannot claim to love your country and, at the same time, cause death and pain to the people who live here. All who live here deserve to be cherished equally.”

He said that “spirit of coming together against violence has brought us a long way in the last 20 years”.

“It will continue today for we believe the original Good Friday message that love is stronger than hatred,” he said.

The Church of Ireland Bishop of Derry and Raphoe Ken Good was “outraged” at the murder of Ms McKee.

“My first thoughts, today, are with her partner, her family and friends. I sympathise with them in their heart–breaking loss and assure them that their pain is being felt right across our community. Sadly, though, Lyra’s death, while needless, was not entirely unforeseeable,” he said.

Those who murdered her “have this young woman’s blood on their hands”. “They claim to be liberators of the community. In reality, they are its oppressors,” he said.

The Moderator of the Presbyterian Church in Ireland Rev Dr Charles McMullen described Ms McKee’s as a “totally appalling, outrageous and unjustifiable act”.