Up to 2,700 homes planned for west Dublin suburb but concerns are mounting 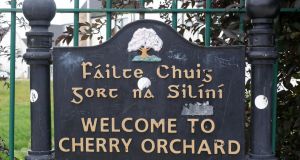 Fears are growing for the planned development of thousands of new homes in Cherry Orchard following revelations of attacks and protection rackets at building sites in the west Dublin suburb.

Dublin City Councillors this week approved plans for up to 2,700 new homes for a population of more than 10,000, with schools, shops and community facilities in Cherry Orchard.

Park West-Cherry Orchard Local Area Plan also makes provision for one of the State’s first affordable housing schemes. This development, which is already out to tender, would produce homes for sale in Cherry Orchard starting from €136,000 and is due to get under way next year.

A large-scale affordable rental scheme is also planned as part of the LAP on the council-owned Park West site.

However, following reports that protection payments were made to criminals to stop attacks at housing sites in the area in 2016 and 2017, there are now serious concerns for the implementation of the plan.

“We are concerned, as we have been since we raised this issue in 2016, that if interference from criminals at sites is not dealt with there will be a contagion to other sites,” local Sinn Féin councillor Daithí Doolan said.

“Now the Local Area Plan has been passed it is vital a line is drawn under this, or these people will become further emboldened and a criminal economy will be embedded in the area.”

The plan makes provision for construction apprenticeships for local young people, and this would also be at risk if criminals were not removed from the equation, he said.

“I am concerned that if this isn’t dealt with, if a line is not drawn in the sand, developers will shy away.”

Independent councillor Vincent Jackson said the many positive developments proposed under the plan, including retail and community facilities that would be “front-loaded” for those already living in Cherry Orchard, must not be derailed by a small criminal element.

“It is such a tiny minority in the community that do exert an enormous amount of influence. Kids look up to them because they see them dripping in wealth from their ill-gotten gains, but their longevity is not great. Very few of them live to be old-age pensioners.”

The same level of attention that was brought to the northeast inner city, where a task force and multi-annual funding programme was set up in 2016 to tackle gangland crime and deprivation, needed to be focused on Cherry Orchard, he said.

“I am a firm believer that the south central area should have the type of response the taoiseach of the day Enda Kenny brought to the north inner city.”

The council’s head of housing Brendan Kenny said there had been an improvement in Cherry Orchard since 2016 and a “strong implementation plan” for the Local Area Plan would ensure that improvement was solidified.

“We want to implement this plan as quickly as possible. In addition to providing much-needed housing, development on smaller infill sites as well as the larger sites helps eliminate anti-social behaviour. It will allow the larger community to take back control from what is a small group.”

Mr Kenny argued developers could have confidence to work in the area unmolested. “I don’t think developers will be put off. I would like to think a lot of the problems we did have there have been eliminated.”