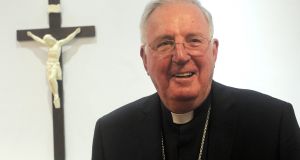 Cormac Murphy-O’Connor, the former Catholic archbishop of Westminster, has died at the age of 85, a church spokesman has said.

He became leader of the Roman Catholic church in England and Wales in 2000, and was appointed as a cardinal by Pope John Paul II the following year. He retired in 2009 on his 75th birthday.

After he became seriously ill, his successor, Cardinal Vincent Nichols, wrote to bishops and priests asking them to pray for the former archbishop, saying his health had “taken a defining turn”.

He added: “As you will know so clearly, for Cardinal Cormac these loving prayers are a source of great strength and comfort as he calmly ponders on all that lies ahead, all in God’s good time.

“May the Lord strengthen him in faith and trust and may the prayers of the church, which he loves so much, comfort and uphold him.”

Murphy-O’Connor was one of three brothers from an Irish family who became priests after growing up in Reading, Berkshire.

His parents George and Ellen Murphy-O’Connor emigrated to England from Co Cork before the First World War.

In the Vatican, he was a close ally of fellow cardinal Jorge Mario Bergoglio, who was elected as Pope Francis in 2013, although Cardinal Murphy-O’Connor was ineligible to vote as he was by then over 80.

He was also a fan of Tony Blair, who converted to Catholicism six months after stepping down as prime minister in 2007. He later said Mr Blair had considered converting for many years, but he had advised the Labour leader not to rush it.

Soon after succeeding Basil Hume as the Catholic leader in England and Wales, he became embroiled in controversy over his handling in the 1980s of a paedophile priest, Fr Michael Hill, in his previous diocese of Arundel and Brighton.

After receiving a complaint about Fr Hill concerning a minor, Cardinal Murphy-O’Connor ordered him to undergo counselling, and later appointed him chaplain at Gatwick Airport, where he abused again. Fr Hill was jailed for five years in 1997.

Publicity around the case prompted calls for his resignation as archbishop of Westminster, which he resisted. Instead he set up an inquiry under Lord Nolan into safeguarding in the Catholic church.

Two years ago, on publishing his memoirs, An English Spring, he told an interviewer: “Of course, with hindsight, I should have reported [HILL] to the police. I don’t want to make any excuses. It’s very shameful.”