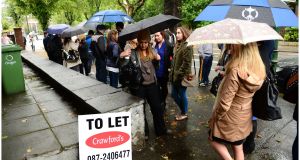 Rents have increased by almost 12% year-on-year to June, according to a new survey. Photograph: Bryan O’Brien/The Irish Times

Rents have increased by almost 12 per cent year-on-year to June, according to a new survey.

This means it now costs almost €3,000 a year more in Dublin and €1,500 a year more outside the capital to rent. There is little sign that the increase is showing signs of slowing down.

According to the survey, which comes from the property website Daft.ie, average rents across the country reached a new all-time high in the period April-June for the fifth-quarter in a row, rising to €1,159 a month.

Rents are now rising in every county across Ireland, with the average national rent up by 11.8 per cent, or €122 a month, in the year to June 2017.

Ronan Lyons, economist at Trinity College Dublin and author of the Daft Report, said given the demand for student accommodation over the summer months and the lack of supply, it is “unsurprising to see rents reach a new high”.

“The rental market remains in severe distress due to a lack of supply and thus the appropriate policy response is to boost supply of all forms. This includes purpose-built student accommodation.

“Based on demographics and other factors, Dublin alone needs a block of 300 student beds approved every month until the late 2020s,” Mr Lyons said.

Rents are rising at a faster pace in the capital, with rents up 12.3 per cent in the period, indicating that rents are now over 18 per cent – €260 a month – higher than their previous peak in 2008. In Galway, the increase is even more pronounced, with rents now 21.4 per cent above 2008 levels.

“The cost of a single or double room in most parts of Dublin rose by almost 10 per cent in the year to June.

“The fastest growth rate was reported in Dublin city centre, with average rents of €1,741.