Charity which has been ‘lurching from crisis to crisis’ asked HSE for €300,000 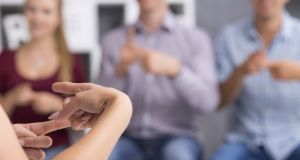 The Irish Deaf Society is planning to cut services, particularly in the area of advocacy, and lay off up to five staff members. Photograph: iStock

A charity providing services for the deaf community, left on the brink of closure due to a funding shortfall, has been “lurching from crisis to crisis” for several years, internal correspondence reveals.

The Irish Deaf Society had recently unsuccessfully appealed for an emergency €300,000 in funding from the Health Service Executive (HSE), warning the charity could be forced to close if the grant was not forthcoming.

Following lobbying from Minister of State with responsibility for disability services Finian McGrath, the Department of the Taoiseach granted the charity €60,000, on a once-off basis.

The funding shortfall means the charity is now planning to cut services, particularly in the area of advocacy, and lay off up to five staff members.

In an email to HSE officials last December, new chief executive John Sherwin said the charity’s operation had been “lurching from crisis to crisis”.

Mr Sherwin said the charity had been “actively reforming the organisation’s board, governance and operation”, but desperately needed interim funding, to buy time to develop a “sustainable” model.

The charity applied for a grant of more than €512,000 in July 2018, which was rejected by Dr Cathal Morgan, head of HSE operations for disability services. He said it was rejected because the charity’s work related “in the main to advocacy, training and development, as distinct to the delivery of health and social care supports”.

The application said if the State failed to provide funding, it would “infringe” on the United Nations Convention of Rights for Persons with Disabilities, as the charity was the “foremost representative organisation of the deaf” in Ireland.

The correspondence was released to The Irish Times under the Freedom of Information Act.

The charity received €195,000 from the HSE to cover running costs from May to September last year, but only on the basis that it was an emergency fund and not to be repeated.

Mr Sherwin told HSE officials last December the threat of “ceasing to exist is now at our doorstep”.