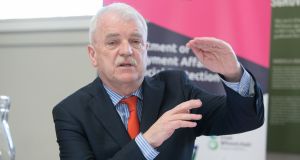 Minister of State with Responsibilities for Disability Issues Finian McGrath said the convention offers “an opportunity to reassess our attitudes to people with disabilities, and to place a renewed focus on their place in society”. Photograph: Collins

Disability rights campaigners have described as “deeply worrying” and “ridiculous” the decision by the Government to ratify the United Nations Convention on the Rights of People with Disabilities (UNCPRD) but not to allow people with disabilities complain to the UN if their rights are violated.

The decision renders the convention “toothless” said one campaigner and is akin to “having your cake at last but not being allowed to eat it”.

Despite having begun the process last week of ratifying the UNCRPD, the Government confirmed over the weekend it would not ratify the “Optional Protocol” to the convention at this time.

The protocol allows people or groups, who believe their rights have been violated under the convention, to take a case to the UN. They must exhaust all domestic avenues to remedy the situation before going to the UN.

Minister of State with Responsibilities for Disability Issues, told the Dáil last week, as he moved a motion to begin the process toward ratification, that the convention, “offers us an opportunity to reassess our attitudes to people with disabilities, and to place a renewed focus on their place in society”.

Ireland will be the last EU State to ratify the convention society having signed the framework document 11 years ago. Last week’s events were hailed as hugely significant by disability groups.

“For this reason, it is the department’s view that a phased approach is the most practical and realistic way of moving ahead so the optional protocol is not being ratified at this time.

“The matter of signing the optional protocol will be reviewed and further considered following completion of the first reporting cycle under the Convention. Due to the variability and uncertainty of the reporting cycle we are not in a position to give an exact date at this juncture.”

The Disability Federation of Ireland described the Department’s stance as “ridiculous”.

“While the convention has a broad range of commitments, the optional protocol is just the complaints procedure. It requires no action by the state at all, expect for responding to the complaints.

“Given the relative weakness of this instrument the government’s unwillingness to introduce the protocol seems to indicate extreme nervousness about the robustness of disability services in this country.

“We will not have disability services that come anywhere near meeting the aspirations of the UN CRPD until we see significant investment in budget to these cash-starved services.”

Suzy Byrne, co-chairman of Disabled People of Ireland, said: “For all the hype about the government finally ratifying it, appears we as disabled people have been told again that we can have our cake but we cannot eat it.

“The government have continued in their deception instead of leading to true emancipation and full citizenship being afforded to 640,000 people in the state.

“The convention without the optional protocol is toothless,” she said.