Only 68% of Traveller accommodation promised has been provided 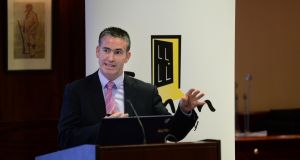 Settled residents may lose the right to be consulted on the location of Traveller accommodation, the Minister responsible for housing has said.

Damien English, Minister of State at the Department of Housing, told an Oireachtas committee on Thursday he wanted to make “whatever changes are necessary” to accelerate delivery of Traveller accommodation.

He would consider removing the function of deciding the location of Traveller accommodation from local authorities to a national body, such as An Bord Pleanála, if it was recommended by an expert group to be appointed this month.

The Oireachtas Committee on Housing was discussing a report, published by the Housing Agency last September, showing Traveller accommodation targets had not been met at any point since made mandatory on local authorities 19 years ago.

It found more than €55 million provided for Traveller housing remained unspent since 2000 and just 6,394 of the 9,390 – or 68 per cent – units of Traveller accommodation promised had been provided.

Mr English said the National Traveller Accommodation Consultation Committee (NTACC) was appointing a sub-committee to make recommendations on how to address these issues. He wanted its recommendations “within three months” and he would act on them.

Committee members described the failure of local authorities to provide sufficient, adequate Traveller accommodation as a “scandal”, and several cited opposition by settled residents, and then by councillors, as the main stumbling blocks.

Sinn Féin TD Eoin Ó Broin said the national under-spend on Traveller housing last year, at 45 per cent, was the largest “in recent years”. The problem was local politicians, but also some county managers who refused to use their executive powers to over-ride councillors voting against sites.

“We need to get into the business of naming and shaming . . . those local authorities and those individuals who are denying people access to adequate and appropriate accommodation.”

He said the Minister would have the “full support” of Sinn Féin, nationally and locally, if he introduced measures to remove power to locate Traveller accommodation from any council failing to provide it, for a set period.

Fianna Fáil TD Éamon Ó Cuív said the committee “had to face up to the fact that there are local authorities around the country that will do anything to avoid facing up to this issue”.

He called for a body such as An Bord Pleanála to decide on the location of Traveller sites, having regard to councils’ Traveller Accommodation Programmes.

Mick Barry TD (Solidarity-People Before Profit) cited examples of Travellers living in “Third World conditions” in his Cork North-Central constituency, including Spring Lane – a site built originally for 10 families and now home to 31, many without access to sanitation or electricity.

“Normally I would be very reluctant to take powers away from local authorities but where councils are not doing their job and human rights are not being respected that’s a different matter.”

Mr English said the Department was now “tracking” how and whether money for Traveller accommodation was being spent.

“It’s not good enough that money is being allocated but isn’t being spent,” he said. “We won’t get action here if we don’t change the system.”