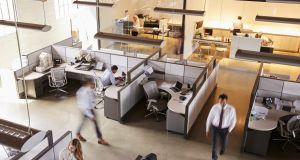 Forsa indicated it would seek talks on reducing working hours for State employees to pre-crisis levels as part of a mid-term review of the existing public service pact with the Government. File photograph: Getty

The Government will face claims for special pay rises of 6 per cent from staff in the public service as compensation if it does not roll back additional working hours introduced after the economic crisis, one of the country’s main unions has warned.

Kevin Callinan – incoming senior general secretary of Forsa which is the largest public service trade union – also signalled that it will seek a review of the current pay deal with the Government to take account of unforeseen rises in inflation.

Speaking at a Forsa civil service conference in Kilkenny on Wednesday, he said the current public service agreement was scheduled to run for another 19 or 20 months. However, he warned that the landscape had changed over recent weeks and it “simply will not be possible to maintain confidence (in the existing accord) unless there is a change”.

Mr Callinan also said that such a mid-term review of the current public service agreement could look at priority issues for different groups of State employees.

He said if there was a clear understanding that a review would produce outcomes that could be accommodated in the next pay bargaining round of negotiations, “that could go a long way to restore confidence and stability”.

Asked about the impact of the recent settlement with nurses after their strike, Mr Callinan replied that the Government had changed the landscape over last few months. He said the public service accord “ had been stretched”.

It is “not going to be tenable to maintain confidence in the agreement for another 19 or 20 months in circumstances where some groups seemed to be getting more rewards than others by taking a particular approach to the agreement”, he said.

Forsa indicated it would seek talks on reducing the working hours for State employees back to pre-crisis levels as part of a mid-term review of the existing public service agreement with the Government.

Mr Callinan said there are “exploratory discussions “ under way with Government representatives on its proposals for a review in the wake of the recent nurses’ settlement.

The trade union disputed Government estimates that rolling back the additional working hours imposed on civil and public servants following the economic crash could cost more than €600 million per year. Mr Callinan told the conference that this figure suggested by the Department of Public Expenditure was at least 50 per cent higher than the Government’s forecast when the additional time was introduced in 2013.

He also maintained that “advances in new technologies and work organisation could defray much of the cost of reduced working time in the public service and elsewhere”.