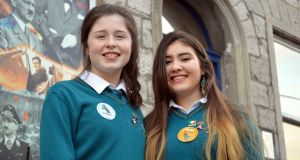 Sascha Cumiskey was preparing for her seventh year co-ordinating the transition year Young Social Innovators (YSI) project at Largy College in Clones, Co Monaghan, when word spread that a couple of Syrian families were to be resettled in the town. Cumiskey had planned to focus on internet safety with her incoming fourth year students but the new arrivals put a different idea in her head.

One year on, her 28 YSI students have designed an app, Monaghan Welcomes You; produced and launched a book, The Gingerbread Man’s Fight to Freedom; and designed a number of board games to teach young children about refugees.

“The genesis was we had so many newcomers,” says Cumiskey. “By chance one of the Syrian students was placed in transition year and the app came about as a result of discussing what would be useful to somebody who was new to the community. One of our students, Monika Gundenaite, developed it. She had no specific training and just figured it out herself. She gathered a team of students and gave each person a town to collate local information.”

In January the students uploaded the app to the Google Play store with information in seven languages on doctors, schools, churches, leisure facilities, shops and Garda stations in towns across Co Monaghan.

The students also wrote and illustrated a children’s book about a gingerbread man who flees his home country, which was launched at the Monaghan County Museum. Caitlin Connolly (16), one of the students, designed a board game for primary school students. “We were trying to figure out ways to help young children understand the journey of the refugee. You have your snakes and ladders but also have other obstacles. If your boat starts sinking, you go back two spaces or if you get help from the Red Cross, you up a ladder,” said Caitlin.

The board game’s story is based on transition year student Lilav Mohamed’s personal experience of fleeing Syria. Caitlin has been helping Lilav with her studies since she arrived at the school without a word of English.

“I felt really bad for Lilav. She was finding it hard to understand us and obviously had no idea what was going on. I started off with our music class and went back to what we learned in first year. In biology, before a test, I wrote out flashcards with the questions and long words.”

Cumiskey said the project has enabled her students to look beyond any negativity around immigration and develop a “global knowledge” while also becoming politically active. The group is now contacting local TDs and Government offices to help Lilav bring her sister to Ireland with her husband and children.

“It’s just so refreshing to be in an environment when you see youngsters in a different light. It’s brilliant to see what students are actually capable of and the ideas they have. You discover they have so many skills you wouldn’t otherwise know about,” she said.