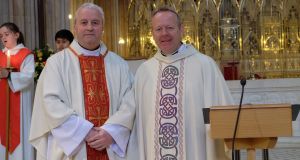 Pope Francis has appointed Father Michael Router as the new Auxiliary Bishop of the Archdiocese of Armagh.

The news of Fr Router’s appointment, which assigns him to the Titular See of Lugmad, was made public on Tuesday by the Vatican. He is currently the parish priest of Bailieborough in Co Cavan in the diocese of Kilmore.

Fr Router said he was shocked and surprised when informed during Holy Week that he was to be appointed as auxiliary bishop in Armagh, saying he never saw himself as someone “worthy of this office” and was conscious of his “limitations and weaknesses”.

“Until that moment I had been happily serving as parish priest in Bailieborough and reasonably expecting, that God willing, I would be there for several more years; perhaps even until retirement,” he said. “I am very grateful to Pope Francis for the trust he has placed in me and I pray that the Holy Spirit will provide what is otherwise lacking.”

Fr Router acknowledged he was “sharply aware that many people do not share the same positive experience of the church that I do” and that for too many years the Irish Church became “too comfortable in its position of temporal as well as spiritual authority”.

People of faith must anticipate and embrace the “unprecedented change” taking place and “never hanker for the certainties of the past but work towards creating a new expression of what it means to be Church in this time and place”, he said.

“Even though I take on this role with fear and trepidation in my heart I do so also with a sense of excitement that we are at a crossroads where we can shape a new existence for our faith communities.”

Archbishop of Armagh Eamon Martin welcomed the appointment of Fr Router who will replace the late bishop Gerard Clifford and expressed thanks to Monsignor Liam Kelly and the diocese of Kilmore for “giving us such a talented and devoted pastor”.

The Archbishop noted that Fr Router had “already gained considerable experience in leading pastoral development and adult faith formation” and that his arrival was welcome during “challenging times for all of us in the Church in Ireland”.

“I have no doubt that, if we are open to the promptings of the Holy Spirit, there will be new life and hope in our parishes,” he said.

Fr Router was born in Virginia, Co Cavan in April 1965 and entered the national seminary in Maynooth to study for the priesthood in 1982. He was ordained as a priest for the Diocese of Kilmore in June 1989.