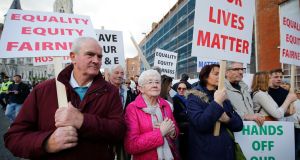 Participants in the Still Waiting Health campaign at the Garden of Remembrance in Dublin. Photograph: Nick Bradshaw.

Dozens of protestors marched through Dublin’s city centre on Saturday calling for the implementation of a national health service and Sláintecare.

The Still Waiting Health campaign was joined by groups from around the country who gathered ahead of the budget to remind the Government of the need for greater investment in the “creaking, dysfunctional” health service.

Anne-Marie Halpin, a nurse with St Michael’s House and a member of the Irish Nurses and Midwives Organisation, said nurses would continue to move abroad for work unless their pay and conditions demands were met.

“I have a lot of younger colleagues who are now converting to other disciplines such as speech and language and occupational therapy in order to get the parity of pay,” said Ms Halpin. “We have all decided to do nursing to give back to our country in a good way but we feel demoralised.”

Gillian Kearns from Waterford, who has Ehlers-Danlos syndrome, a disorder that affects connective issue, said the lack of specialists in Ireland was forcing those who suffer from the condition to fundraise their own money to travel abroad for treatment.

“The HSE will say that any rheumatologist can deal with it but the reality is that people are not getting the help they need. It’s called a rare syndrome but to be honest it’s more common than people think, it’s just rarely diagnosed.

“It’s very often dismissed until people have a loss of mobility. People shouldn’t have to get to that stage to be taken seriously. They shouldn’t be fobbed of, told it’s all in their heads, that it’s growing pains.”

Most people who suffer from the condition must travel to London or Barcelona for treatment, she said. “We need more trained professionals or, if that’s further down the line, the treatment abroad scheme needs to include people with this. It shouldn’t be on people to have to fundraise to get basic healthcare.”

Melisa Halpin, councillor with People Before Profit, said the current health service relies on the support of charities, voluntary organisations and religious orders to function.

“It should be run by the State, funded by the State and free at the point of delivery for everyone,” said Ms Halpin. “We need to start building a national health service. They need to invest in the future, not just firefight.”