Protesters call for end to ‘injustice’ of pensions anomaly

Changes in 2012 ‘discriminating against’ 40,000 who took time out of workforce 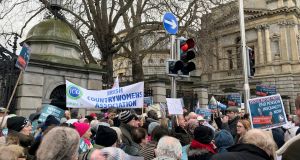 About 300 older people protested outside Leinster House on Thursday over the effects of changes to how pension contributions were calculated in 2012. Photograph: Michelle Devane/PA Wire.

About 300 people protested outside Leinster House on Thursday as the Cabinet considered proposals aimed at addressing aspects of the State pension scheme that are seen to discriminate against part-time workers and those who took time out from the workforce*.

Minister for Social Protection Regina Doherty said she planned to bring proposals to Cabinet on Thursday aimed at addressing an anomaly which was introduced in 2012 alongside changes to how pension contributions would be calculated.

At the time, the system was changed to double the minimum number of contributions required for the State pension. More bands were also added, which cut the pension by €30 and €80 per week for recipients, mainly women who had taken some time out of the workforce.

Speaking to journalists on the fringes of the protest, Ms Doherty said she would “fight very, very hard” to make sure the anomaly was addressed.

“I do accept the averaging system didn’t take into account people who had gaps in their lives, over and above marriage and the homemakers’ credit.”

Asked if she could guarantee a resolution before 2020, when further changes to the pension system were planned, she said: “The only assurance I can give is that we have done extensive work to address and report on the issue. I have a proposal going to Cabinet . . . I would be ambitious and hopeful but I can’t determine the outcome of that meeting.”

She said the 2012 changes were correct. “It’s moving towards a ‘total contributions’ model that both this Government and the previous government and Fianna Fáil all recognise is the right model to go to.

“But there were people who were adversely affected because of that averaging system who are getting less of a pension than some people who had lesser contributions paid and that’s not fair . . . I can’t guarantee anything but I am going to try.”

Among those protesting was Ann Coughlan (70) from Lucan in Dublin. “It is an injustice. Why are we being discriminated against?”

This was an opportunity for Ms Doherty to “do something good for the women of Ireland.

The protest was called jointly by Age Action Ireland, the National Women’s Council of Ireland, the Irish Countrywomen’s Association and several trade unions.

The Government has already promised to reform the system so that eligibility for a State contributory pension would be based on the total number of PRSI payments made during a working lifetime.

At the moment, eligibility is based on a system called “averaging,” where an average number of contributions made each year is counted, with a minimum number required for any pension.

It takes the first PRSI stamp paid as the starting point even when that might be in relation to a part-time student job.

Up to 40,000 people, many of them women who left or were forced to leave the workforce decades ago to raise families, are disadvantaged by the current method of assessing the State pension.

Man dies after part of a building collapses in Tralee 10:57
Astronaut Chris Hadfield offers to ‘talk space’ with Adam from the Toy Show 11:00
Man arrested over murder of mother and her two children 10:02
Man in his 60s dies in Co Roscommon house fire 09:05
Problem of maintenance persists 25 years after divorce introduced 06:00

1 Ireland in precarious position as third Covid-19 wave could be more deadly, Nphet warns
2 Man arrested over murder of mother and her two children
3 Covid crisis: Republic to move back to Level 3 as shops open from Tuesday
4 Astronaut Chris Hadfield offers to ‘talk space’ with Adam from the Toy Show
5 Ex-barrister Patrick Russell conned people out of more than €12m, gardaí say
Real news has value SUBSCRIBE