Roma children in Ireland ‘starving’ due to ‘relentless’ poverty

Emily Logan says half the 5,000 Roma living in the State ‘struggle to survive day to day’ 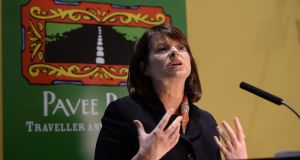 Emily Logan said the poverty experienced by more than half the 5,000 Roma living in the State was ‘relentless’. Photograph: Alan Betson/The Irish Times

Roma children in Ireland are going to school “starving” due to high levels of poverty, a leading member of the community said on Thursday.

Gabi Muntean, Roma community worker with the Traveller and Roma support organisation, Pavee Point, gave an emotional address at the publication of a landmark study on the community on which she was lead researcher.

Roma In Ireland: a needs assessment, commissioned by the Department of Justice, found more than 50 per cent of Roma live in consistent poverty with many children malnourished.

Many Roma have no income apart from what they received through begging, the report found. Almost half of Roma households (45 per cent) lived in severely overcrowded housing, often without gas, electricity, running water or sufficient food.

“It is not right,” said Ms Muntean departing from her prepared script. “There were times doing this research that I left people’s homes feeling guilty I had bread on my table. Even I did not realise how much poverty there is among my people. From Cork to Dublin I was crying for my people.

“People need to understand, they look down on us. They do not care that we are living in abandoned houses...There are Roma children going to school starving. They are going to school and their parents have no income. This is the way my community is living. It is not right....We need the State to support us. We need a change for the Roma community.”

Emily Logan, chief commissioner with the Irish Human and Equality Commission, said the findings were “shameful” and should make everyone “uncomfortable”.

She said the poverty experienced by more than half the 5,000 Roma living in the State was “relentless” and the “struggle to survive day to day” made social inclusion for them “extremely difficult”.

Referring to a finding that 25 per cent of pregnant Roma women received no ante-natal care due to a fear of costs, and accessed maternity care only when they were giving birth, Ms Logan said: “This is very, very shocking, in Ireland in 2018, to say the least.”

The habitual residency condition, whereby people must prove a long-term link to Ireland to access welfare supports, was a “huge barrier in terms of access to security payments” she said, which “especially impacts on women”.

The depth of poverty left too many Roma “relying on humanitarian response”. This was “outrageous in 2018” said Ms Logan.

Gareth Byrne, principal officer in the equality division in the Department of Justice, described the report’s findings as “shocking”.

He said the report was the “single most important” piece of research on Ireland’s Roma, and stressed the importance of the wider community understanding the Roma community. Discrimination and racism against “marginalised people” were “irrational,” and rooted in ignorance.

“Often it is the people with the fewest contacts with a community who have the most extreme views,” he said.

Roma have been intermittently present in Ireland, in small numbers and as seasonal workers, for over a century.

Their numbers increased after the accession of eastern European states to the EU in 2004, when they were able to enter the State legally.