Locals gather in Ballivor to protest against centre

Some of the residents of the village of Ballivor, Co Meath have protested over the development of a Narconon Trust drug rehabilitation centre, which they claim is linked to the Church of Scientology. Video: Enda O'Dowd 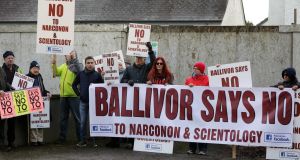 A Scientology-linked drug treatment facility opening in Co Meath intends to treat addicts with sauna sessions and vitamins, according to planning documents.

The facility, which will be run by The Narconon Trust, will operate out of a redeveloped facility on the old National School site in the small village of Ballivor.

Narconon has long attracted controversy over its close connections to Scientology and because of its controversial treatment practises.

In 2012 Narconon lost its license to operate in Oklahoma following an investigation into several deaths at its flagship facility there.

On Wednesday afternoon, about 100 Ballivor locals, out of a population of 1,700, gathered outside the site of the proposed treatment centre to protest against its presence in the village. It is understood Narconon intends to have the facility open by May.

Locals say they intend to use planning laws to stop the facility from opening but there may be little they can do.

The previous owners of the site, Smyth and Smyth, applied for and obtained permission in December 2014 to open a nursing home on the site.

In September 2016 Narconon asked Meath County Council if it would have to reapply for planning permission if it bought the site and opened a drug treatment facility there.

The Council replied that, per its understanding of planning regulations, no new application would be necessary. Narconon went on to buy the site in 2017.

This meant there was no public consultation process, meaning locals only became aware of the plans around October 2017 when rumours spread around the town about the identity of the new owners.

A Council spokeswoman told The Irish Times, “the applicant is not a consideration” under the planning code.

“Once a permission is granted then anyone with sufficient legal interest in the land is entitled to develop in accordance with that permission.”

According to a letter sent to the Council by The Narconon Trust, which has been seen by The Irish Times, users of the facility will undergo a three-month course during which time they are not allowed to leave the facility except towards the end of their stay when they may take a walk accompanied by a member of staff.

The detoxing of drug users will be done using daily sauna sessions for 2-3 weeks and “sweating out of the body all the drug residues still in the body.”

This phase must be authorised by a doctor due to the number of hours spent in the sauna and “the physical stress involved,” the letter states. It is understood users can spend up to five hours per day in the sauna.

No methadone or other drugs are used in the process. Instead users are given “vitamins and minerals which help alleviate their symptoms”.

The Department of Health this week said the treatment programme has “limited or no basis” in the science of human physiology and brain functioning.

However, with no legislation currently in place to regulate private addiction treatment services, the centre will be free to operate without permission or supervision from the Department of Health or the HSE.

Scientology’s Irish representative has previously said she has no knowledge of the plans for Ballivor and claims Narconon is a separate, “secular” organisation to Scientology.

However the two organisations are closely linked and share many of the same staff, documents show.

The person who corresponded with Meath County Council in 2016 is Massimo Angius, who described himself as a director of the Narconon Trust in the UK. Company documents show Mr Angius is also listed as a director of the Church Of Scientology Religious Education College.

When asked by phone last week whether Mr Alabaster was available to talk, a staff member at the Church of Scientology national affairs office in Merrion Square said Mr Alabaster was not in the office but had visited Ireland a number of times in recent months to work on a “project” in the country.

The staff member also confirmed that Mr Alabaster “moves around a lot” and that he is based in the US.

Updated requests for comment from the Church of Scientology and Narconon in the UK went unanswered this week.

The Taoiseach replied: “I am absolutely of the view that the only people who should provide addiction services are those who are appropriately qualified and licensed to do so.”

Mr Varadkar said he had read a little about the issue in the papers but did not know all the details or facts.

On Thursday Mr Cassells attended the protest where he told The Irish Times: “We need the Department of Health to investigate. If [Narcanon]do arrive the Department must act and ensure they do not proceed.

“It is incumbent on the Taoiseach and Minister [for Health Simon] Harris to look into the actual legal standing as to whether this can proceed.”

In the eyes of locals, the opening of a Narconon centre in Ballivor does little to help the area but creates several challenges.

Residents complain the village will be become associated with the controversial religion but few jobs will be created as Narconon and Scientology tends to bring in staff from overseas.

There were less than 100 Scientologists in Ireland according to the last census.

There are also concerns about the ability of an isolated village with few amenities to accommodate a 56-bed drug treatment centre, no matter who is operating it.

One of the organisers of the protest, local councillor Noel French said he believes opposition to the centre “breaks down 60/40”.

“Sixty per cent of locals are in opposition to Scientology and the fear as to what it entails and 40 per cent would be concerned about the drug rehab aspect,” he said. He said the proximity of the centre to schools is a particular concern.

“You have the child care centre here, you have the playground and Montessori school there and the national school. And you have the community centre down there.