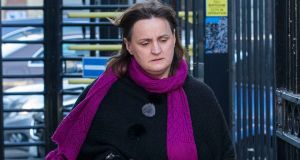 Kathleen Chada: “It turned out he had a gambling problem – it was hiding in plain sight.” Photograph: Collins Courts

The mother of Eoghan and Ruairí Chada, Kathleen Chada, has said she is serving a life sentence after her husband killed their children.

Sanjeev Chada (44) was sentenced to life imprisonment in 2014 after admitting to what the Central Criminal Court heard was a crime fuelled entirely by mounting gambling debts.

In July 2012, Chada drove his boys Eoghan (10) and Ruairí (5) to Co Mayo, where he strangled them before writing in a note: “I suppose we will always be together now in some way.”

He survived the impact and is serving two concurrent life sentences.

Speaking on RTÉ Radio One’s Today with Seán O’Rourke show, Ms Chada said she has set up Save – Sentencing and Victims Equality, together with five families whose lives have been affected by murder.

“What we want is some changes to sentencing. I know for me personally, if the judge had been in a position to say, ‘serve a minimum of’ . . . because I know that after 10 years he can apply for parole,” she said.

“I don’t know whether he will or not . . . which means that in another five years, I have to get my head around the possibility. From the very beginning I felt that there was a possibility that he will turn up and I’ll meet him at the grave,” she said.

“Not all life sentences are served in prisons. I’ve got a life sentence and I can’t get early release. What we want is more account of victims and families of victims.”

Ms Chada said her husband’s actions were made even more unbearable as she said it was a “complete shock”.

“It was the last thing I thought he would ever, ever do. He had a good standing in the community He was very involved in the community centre with the local GAA, he trained some of the juveniles. A complete shock.”

About two weeks before the boys’ murder, she discovered Chada had embezzled €60,000 from the community to fund a gambling problem that she also described as a huge shock.

“I would have considered him one of the most honest people I have ever known. It was the last thing I thought he ever would do. He had good standing in the community. It is a good, tight-knit community,” he said.

It was stocks and shares that he was trading. It wasn’t that he was . . . in a bookies every other week

She said upon the discovery, he disappeared the day after and went driving on his own.

“We talked about it, I was cross . . . I was angry and upset and humiliated. He never explained it . It turned out he had a gambling problem – it was hiding in plain sight,” she said.

“It was stocks and shares that he was trading. It wasn’t that he was turning up in a bookies every other week or anything like that, this was in his mind a legitimate, almost occupation of sorts. I suppose there was nothing to indicate that that was a problem and our own personal finances were not impacted, so I didn’t see anything,” she said.

Ms Chada said she reasons in her own mind that shame drove her husband to kill their sons.

“In his mind he didn’t want Ruairí and Eoin to know his true self and to lose that standing. I t doesn’t seem good enough to say that it was shame . . . it just doesn’t. But I actually think it’s as simple, if you like, as that,” she said.

“I don’t doubt that he loved them but his actions wouldn’t show that,” she said. A month after the boys’ deaths, she discovered an email that contained a suicide note in which he planned on killing the four of them.

I  lived with him . . . and these were the thoughts that were going through his mind

“Both the boys had an email account from when they were born. I was reading through Eoghan’s and in it there was an email which was effectively a suicide note in which he had planned to take the four of us and that would have been written about a year-and-a-half before he took the boys . . . How do you hide something like that? As I said, I lived with him, I slept next to him every night and these were the thoughts that were going through his mind.”

She says she has attended a psychologist for the past few years to try to come to terms with it: “There are still unbearable times,” she says. “I don’t consider myself to be suicidal, but there are many times when I just wish I wasn’t here.”