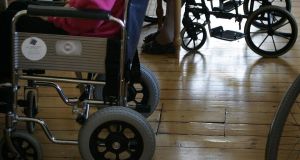 Hiqa has published 17 reports on residential centres for older people

A nursing home in Dundalk had just one member of staff providing support for up to 17 residents with complex needs in a communal room and did not satisfactorily protect the privacy and dignity of residents, an inspection report has found.

The Health Information and Quality Authority (Hiqa) on Thursday published 17 reports on residential centres for older people, including a report that found major non-compliance in some aspects of care at the Blackrock Abbey nursing home, Cockle Hill, Blackrock, Dundalk.

The authority independently monitors designated centres for older people to ensure they comply with healthcare legislation and regulations and that older people living in nursing homes are safe and well looked after.

Evidence of good practice and compliance with the regulations and standards was found in 13 centres, with non-compliance in four centres.

The unannounced inspection at the Dundalk home found “moderate” non-compliance in the areas of safeguarding and safety, health and safety risk management, and safe and suitable premises.

There was “major” non-compliance in the area of governance and management, suitable staffing, and residents’ rights and dignity.

“Inspectors observed that some residents in the communal room on the ground floor displayed responsive behaviours including self-injurious behaviours and found that inadequate staffing contributed to the inadequate protection of vulnerable residents,” the report said.

Inspectors observed there were a number of periods of the day when there was only one staff member available in a communal room to provide support for up to 17 residents with these complex needs.

Although an exercise programme - including music, a sing-along and ball games - was scheduled for residents on the day of inspection, it was not provided.

Due to overcrowding in the communal room on the ground floor and insufficient staff availability on both floors to care for a number of residents with complex and high care needs, their privacy and dignity needs were not met to a satisfactory standard, the inspection found.

An action plan to move 13 residents to new community-based purpose-built accommodation by the end of last August had not been achieved.

Residents and relatives spoken with were “generally positive” in their feedback and expressed satisfaction with the facilities, services and care provided.

However, staff expressed concerns that due to insufficient staff resources they were unable to provide an adequate standard of care to residents, the report said.

At Macroom Community Hospital in Cork, a Health Service Executive facility, Hiqa inspectors found major non-compliance in the area of safe and suitable premises and respect for residents’ rights and dignity.

Bedrooms consisted of ‘ward-type’ accommodation, and there continued to be inadequate bedroom space or private accommodation.

The inspectors found the privacy and dignity of residents was “seriously negatively impacted on” by the lack of space, the lack of easily accessible toilets and showers, and the lack of wardrobes.

Hiqa said that, similar to findings on previous inspections, the premises did not conform to the requirements of the Health Act 2007 or the regulations covering nursing homes.

An inspection report on St Phelim’s nursing home, Dromahair, Leitrim, found the use of multi-occupancy bedrooms “did not support communication and the receipt of personal care in a manner that promoted and protected privacy and dignity and assured residents’ comfort”.

The provider has since started building an extension, with the first phase due to be completed by mid-2018.

At the Mounth Cara facility in Blackpool, Cork, inspectors said frequent errors were encountered by staff in medications delivered to the centre from the pharmacy.

A meeting had been held with the pharmacy to outline these concerns.