40th anniversary of opening of Hirschfeld Centre celebrated in Dublin 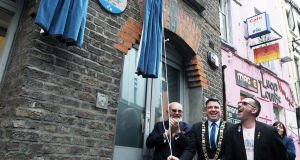 Lord Mayor of Dublin Cllr Paul McAuliffe with Senator David Norris and Eddie McGuinness, director of Dublin Pride Festival at the unveiling of a plaque commemorating 40th Anniversary of the opening of The Hirschfeld Centre in Temple Bar. Photograph: Aidan Crawley/For the Irish Times

A commemorative plaque has been unveiled at the site of Ireland’s first gay and lesbian community centre in Dublin.

The centre was the first lesbian and gay community venue of its kind in the country and included a café, a small cinema and a disco called ‘Flikkers’.

The building was badly damaged in a fire in 1987 but in its short history, the centre influenced and supported equal rights for women and marriage equality.

Lord Mayor of Dublin Paul Mc Auliffe and Senator David Norris together with many of the early organisers and attendees of the Hirschfeld Centre unveiled the plaque on Fownes street in Temple Bar on Thursday evening.

“I am delighted to see this significant cultural centre have a commemorative plaque erected in the year of the 40th anniversary of its opening,” said Mr McAuliffe.

“As the first event in Dublin Pride, it symbolises the vital importance of honouring and remembering the history and level of work that went into fighting for and achieving gay and civil rights.”

“Dublin Pride reminds us that these rights must be fought for and we stand beside those countries and states who do not have these rights, and to protect and assist those in our own country who still feel isolated and alone because of their sexuality identity,”he said.

Mr Norris said the centre was named after Magnus Hirschfeld “in order to preserve the memory of this courageous man whose career had been largely obliterated by the Nazis”.

Mr Norris said the centre became a hub for the gay community and led to the revitalisation of the Temple Bar area.