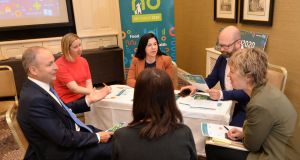 The creation of a role to oversee the elimination of child poverty in Ireland would be a cause of concern as it could undermine the work of Cabinet members, Minister for Social Protection Regina Doherty has said.

Calls for a national director of a child poverty unit is a key aspect of the ongoing No Child 2020 campaign, which focuses on a variety of socio-economic problems affecting children.

The position would sit “within Government” for a limited duration and have a small team of about four dedicated civil servants stewarding policies, according to the Children’s Rights Alliance which is spearheading the campaign.

The alliance has held informal talks with Ministers on the subject in the hope of advancing the idea and says similar offices in other countries have proven successful.

However, addressing the role’s potential at a No Child 2020 political briefing on Thursday, Ms Doherty, a supporter of the general objectives of the campaign, expressed reservations about creating the post.

“The difficulty with that is that the only central organisation or department that could do that is the Department of An Taoiseach and if you take away the responsibility of me, of [Minister for Children] Katherine Zappone, you know, it kind of dissipates the challenge that we have,” she said.

“We are not kids. We all have responsibilities, we all have actions, we know there are budgetary constraints and so you put the targets out in a realistic timeframe that you can achieve, but I don’t need somebody sitting on my shoulder to tell me to do my job. My conscience should be enough of a driver.”

Ms Doherty had earlier told the briefing session by frontline workers across childcare and education that the campaign was “pushing an open door” in terms of her interest and support.

While it is unlikely she will raise the income threshold for access to child medical cards, Ms Doherty said she was committed to greatly improving GP and dental services. Reviewing an existing school meal programme, and expanding it, was also an issue she has considered, she said.

The No Child 2020 campaign is being run in tandem with an editorial initiative of the same name by The Irish Times. A sustained year-long focus on child welfare and children’s issues, it explores the problems facing young people in Ireland today with particular emphasis on child poverty.

The alliance’s political briefing was designed to allow politicians to drop in and informally discuss child welfare issues with frontline workers engaged in each of the campaign’s five areas of focus – food poverty, health, social participation, education and housing.

Addressing attendees earlier in the day, workers outlined several distressing areas of societal neglect such as young children being born into, and growing up in, cramped temporary accommodation; the stress inflicted on parents attempting to cope financially with sudden and severe illness; and the challenge of feeding hungry children in schools.

Rachel Morgan, of the family homeless action team at Focus Ireland, said the number of homeless children had increased from 865 in 2015 to 3,755 last year.

“There are children, believe it or not, born into homelessness. Their norm is to be in homeless accommodation for the first two years of their life,” she said.

Jelena Simic, who runs the early years intervention service at One Family – an organisation providing support for single, sharing and separating parents – deals with children under two years and eight months who cannot access mainstream education and care services.

She said in Ireland’s direct provision centres children live in difficult circumstances with parents’ ability to care for them limited by financial constraints.