Number of homeless children in State reaches highest ever level 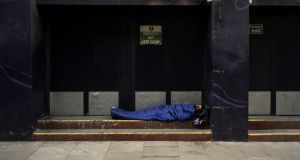 The official monthly figures do not include rough sleepers and do not show the true extent of the homeless crisis, according to a spokesman for Simon Communities. Photograph: Paulo Nunes dos Santos/New York Times

The number of homeless people in the State continues to increase as the latest official figures show 10,397 people are currently living in emergency accommodation.

The figures show an increase of 59 people last month compared to statistics from August, an average increase of around two people every day.

Some 3,873 children are now living without a home in Ireland, according to the Department of Housing homeless statistics for September.

This is the highest ever number of children in emergency accommodation to date and surpasses a previous peak of 3,867 children in July 2018.

The number of adults recorded as homeless also increased slightly up to 6,524 in September. There were 4,370 adults and 2,872 children homeless in Dublin.

There are 148 people living in emergency accommodation who are 65 years of age or older, the figures show.

Commenting on the figures Minister for Housing Eoghan Murphy said the number of people living in emergency accommodation – such as hotel or bed and breakfast rooms – “continues to be a huge problem.”

Mr Murphy said the issue would continue to worsen until housing supply meets demand and “until that happens we will have a problem,” he told RTÉ News at One.

The Government had introduced rental reforms and was increasing and expanding wrap-around supports in homeless family hubs, he said. “Rents are too high but we are increasing supports, which is showing results,” he said.

Wayne Stanley, spokesman for homeless charity Simon Communities, said the Government must address the lack of social and affordable housing as the root of the problem.

The official monthly figures did not show the true extent of the homeless crisis across the country, he said.

“They do not include rough sleepers and those in squats, people in direct provision and women’s shelters, and the ‘hidden homeless’ who have no home of their own,” Mr Stanley said.

The Government’s Rebuilding Ireland programme to tackle the housing crisis “cannot be allowed to drift on as if it was succeeding,” he said.

Mike Allen, head of advocacy at Focus Ireland, said the growing homelessness crisis was “causing so much terrible damage to many individuals and families.”

The charity called for Mr Murphy to introduce tax incentives to make it more attractive for landlords wishing to sell their property to do so with the tenant remaining in place, to prevent families being evicted into homelessness.

“There are now nearly 4,000 children forced to live out some of the most vital development years of their young lives in emergency accommodation such as family hubs, hotels rooms and other unsuitable facilities,” Mr Allen said.

The crisis was also not contained to Dublin he said, with the latest figures showing 462 families and over 1,000 children homeless outside of the capital.

In February, the numbers living in emergency accommodation surpassed 10,000 for the first time, which homeless charities and campaigners criticised as a watershed moment of the escalating housing crisis.

Suzanne Connolly, chief executive of Barnardos said “children across the country are excitedly getting ready to celebrate Halloween with their friends. But for 3,873 children living in emergency accommodation they will have little opportunity to join in the fun.”

“These children will not be enjoying their mid-term break at home, but will be passing the time in unsuitable accommodation. There will be no ‘trick or treating’, no neighbours knocking at the door,” she said.