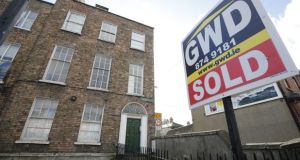 The purchase of the last Dublin home of playwright Sean O’Casey by Dublin City Council is unlikely to go ahead, due to Coronavirus funding constraints, and a reduction in need for homeless accommodation.

The council last March announced plans to buy the house at 422 North Circular Road for use as homeless accommodation. However, the purchase never went ahead.

His daughter, Shivaun O’Casey, last year said housing homeless people would be a “very good use for the house” and something her father would have supported.

The council said its purchase of the house had been “significantly delayed” because of unresolved probate issues in relation to the ownership of the property. “We were informed only recently that these issues were now resolved.”

However, the council said, it has in the intervening year bought other properties in the city for use for emergency homeless accommodation “and the need for same is not as great as it was when we first considered acquiring this particular property”.

Due to the “changed economic environment” it was “not overly confident” it would get the funding required to buy and refurbish the house.

“With the arrival of Covid-19 there is likely to be greater constraints around the availability of Capital Funding towards the acquisition and refurbishment of properties like this one. Therefore, it is now very unlikely that we will proceed with the acquisition of this property for homeless services.”

The property had gone on sale in 2018 for €450,000. However, the council expected the final purchase and refurbishment costs to reach €1.5 million.

When the house went on sale several heritage and cultural organisations, as well as Sabina Higgins, wife of President Michael D Higgins, called for the council to ensure the preservation of the room in which O’Casey worked. Currently, a faded wooden sign beside the front door reads “Sean O’Casey House”, but this is not visible from the public road.

Shivaun O’Casey said if the building was not to be used for homeless people, it could instead be used by an arts organisation, perhaps as a residence for sponsored students, if funds could be raised.

O’Casey’s fellow tenants in the house, where he lived through much of the 1920s, provided inspiration for several of his characters, including Mollser Gogan and Captain and Juno Boyle.

The four-storey house was built as a family home in 1810, but was divided into tenement flats more than a century ago and until recently was in use as bedsit accommodation.

The house has retained some of its Georgian features including an ornate fanlight and cast-iron griffin boot-scrapers and is on the Record of Protected Structures.

It was recently broken into and the basement entrance is now boarded up. Independent councillor Nial Ring said it was disappointing the purchase didn’t go head and was concerned the building would fall into dereliction.

Independent councillor Mannix Flynn said it was the responsibilty of the council to ensure the “integrity of the building” was protected, but not to buy the house.