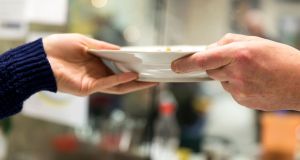 “Simple opportunities that come our way each day to say to someone that they matter, that they are not forgotten, that someone cares.” Photograph: Christian Ender/Getty Images

The German mystic Meister Eckhart said that man knows so many things but does not know himself. “Go into your own ground” he said, “and learn to know yourself.”

Brian Harper, a journalist and author who writes from a Christian perspective, would agree. In his book Less is More, he invites his readers to question what defines them: “It’s usually the headlines from our CV that provide the defining moments of our lives . . . But when we stop to ask what matters, the good news is that we don’t have to be defined by the headline moments alone (or not at all). We are not necessarily the sum total of our qualifications, or the roles we’ve had, or the heights we’ve scaled. Instead, it may be the smallest of details, the humblest of actions, the most disposable of throwaway lines – even things we’ve forgotten we’ve done – that help truly to define who we are.”

That reference to “throwaway lines” came to mind when listening to an RTÉ interview recently with 17-year-old Brandon Fay.

Brandon had been on work experience in a Dublin hospital when he was diagnosed with Covid-19 and ended up in hospital, an experience he described as “very frightening”. He was particularly struck by a comment by one of the nurses: “I’ll never forget the words the nurse said to me on the ward one day. I was a bit upset as I was away from everybody. She came in and was doing a set of observations and giving me my medication. And she goes: ‘We’re your mammy for the next few days.’ Her words just stuck with me and I felt if I can be anything like her, I know I’ll achieve my goal.”

That throwaway line “We’re your mammy” (it sounds wonderfully Irish) and the care that went with it strengthened that young man’s ambition to become a nurse.

On recent Sundays, we have been reading passages from St Matthew’s Gospel which are mostly about Jesus preparing and equipping his disciples for mission.

Tomorrow is more of the same, except for this: “And whoever gives even a cup of cold water to one of these little ones in the name of a disciple – truly I tell you, none of these will lose their reward.”

It could not be clearer. Jesus is making the point that it is ordinary people doing the simple things that authenticate Christian discipleship. Christianity is to be lived more than admired and that happens every time we take the trouble to write a letter, send a card or make that phone call – simple opportunities that come our way each day to say to someone that they matter, that they are not forgotten, that someone cares.

Restricted access to church buildings in recent months has been distressing for clergy and people, especially those who are regular church goers. The loss of the Eucharist, the Sacrament of Christ’s presence, has been especially painful, but in a parable Jesus spoke of his presence in a different sense which remains constant: “For I was hungry and you gave me something to eat, I was thirsty and you gave me something to drink, I was a stranger and you invited me in, I needed clothes and you clothed me, I was sick and you looked after me, I was in prison and you came to visit me . . . whatever you did for one of the least of these brothers and sisters of mine, you did for me.”

Jesus is closer than we realise and “being” Christian is not confined to a church building, a liturgy or indeed people we know. As a young woman exited Dublin’s Pearse train station on a winter’s day she passed by a homeless man sitting on the footpath. She went into a nearby shop only to return with a coffee and sandwich which she gave the man. In that moment of grace Jesus was present both in a homeless man and a woman who did what was needed before quietly disappearing into the morning rush.