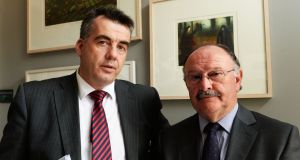 The Charities Regulator has established a panel that will examine ways to improve the management of charities across the State following a series of high profile controversies in the sector.

The Statutory Consultative Panel, announced on Friday, will make recommendations on the development and implementation of governance guidelines for charities and oversee their codes of conduct.

The collapse of the suicide prevention charity Console made headlines last summer after it emerged that senior figures, including its founder Paul Kelly, had run up credit card bills of almost €500,000 on items such as groceries, designer clothes and foreign trips from 2012 to 2014.

News of the €741,000 severance package given to the former Central Remedial Clinic (CRC) chief executive Paul Kiely also brought focus on the sector as did the departure of Angela Kerins from the Rehab Group after some heated appearances before the Dáil’s Public Accounts Committee.

The Wheel, a national network of some 950 charities, later said bad publicity surrounding the sector had seen some 60 per cent of charities report decreases in donations due to reduced public confidence.

The Charities Regulator was established in 2014 under the Charities Act 2009 to register charities and monitor compliance with legislation. Its chief executive John Farrelly on Friday stressed the need for efficient management of the “essential support and services” provided by charities to the most vulnerable in society.

“It is precisely because of the work charities do, that it is so essential to the overall good of our society, as well as to the specific individuals they assist, that every charity is managed properly,” he said. “The work of the panel will enable the Charities Regulator to ensure that an appropriate governance framework for charities is put in place.”

Minister for Justice Frances Fitzgerald warned last year that many charities were duplicating the work of others and should consider merging or sharing staff. She said she hoped the regulator would help to create a clear picture of all the work carried out in the charitable sector so as to avoid duplication.

Mr Farrell said at the time that it was vital that everyone, including State agencies, brought concerns about wrongdoing in any charity to the regulator’s attention and that it had been “unacceptable” that the HSE did not bring its concerns about Console to the authority’s attention

The first meeting of the consultative panel is due to take place on March 30th and its work is expected to be completed by the end of the year.