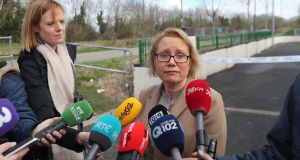 Fiona Ryan of the Sonas domestic violence charity at the scene of the fire: “We are scrupulous about protecting our clients’ privacy, in life and in death.” Photograph: Niall Carson/PA Wire

Brigid and Annmarie O’Brien were ‘inseparable’, and “they lived for their children”, a cousin of their families has said.

Jim O’Brien, chairman of the Bray Travellers Development Project, said the two young women were cousins but had grown up together in the same house and attending the same schools.

“Annmarie’s mother, Mary, would have been the sister of Biddy’s [Brigid’s] mother, Bridie. When Mary died, Bridie took Biddy and her brother Andy in. So they grew up together – they were very, very close. You would always see them together.”

Mary and Bridie O’Brien had grown up in the Fassaroe area of Bray, Co Wicklow, and had their families there.

Biddy’s parents, her husband and her siblings were on Thursday at St James’s Hospital where Biddy remained in intensive care. She suffered extensive burns in the fire in an apartment in Clondalkin on Wednesday morning. The apartment was in a step-down housing facility for women leaving domestic violence refuges, run by the Sonas housing body.

Annmarie, who was seven months pregnant, died in the fire along with her daughter, Paris (2), and Biddy and Jamie’s children Holly (3) and Jordan (4).

Biddy had been visiting Annmarie and Paris with her children. She lived with her husband and their children at the Aughmore Lane housing scheme in Shankill, Co Dublin.

Annmarie had separated from her former partner. Her father, Martin, is still alive.

In January 2011, Annmarie’s brother Andrew (20) died in a fire in an outhouse he was sleeping in at the back of a church in Bray.

Following his death she posted on social media: “Love you, Andy. Thinking of you always. Miss u more than anyone could imagine. RIP.”

Mr O’Brien said the two young women had been close to the Lynch and Gilbert families in Fassaroe, Bray, who lost 10 loved ones in the fire at a Traveller site in Carrickmines, Dublin, in October 2015. Annmarie had been “so excited” about the up-coming birth of her second baby.

“The two women were devoted to their children – they really were the kind of women for who it was all about the children.”

He said he was at the hospital and “the whole family are just in complete shock, numb. I went to support them myself but also to let them know the community is here to support them in any way we can. We are all just praying Biddy will make a full recovery.”

Doreen Carpenter, co-ordinator of the Clondalkin Travellers Development Group, said she had not known Annmarie and her daughter were living in the area, but she offered what support the group could to the affected families.

“We will support in any way we can. We can offer counselling. We will probably having to start a fund to help pay for the funerals.”

Fiona Ryan, chief executive of Sonas, could give no details about Annmarie and Paris, saying: “We are scrupulous about protecting our clients’ privacy, in life and in death.

“But what I can say is that the women and children who come to us, come to rebuild their lives and make a new start.”