Fatal fire: Refuge may have to relocate after media identification 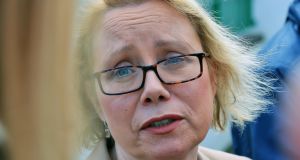 Fiona Ryan of Sonas: “We are a charity which operates facilities very much under the radar, in a very low-key, anonymous way. So, of course we are going to have to look at this.” Photograph: Colin Keegan, Collins Dublin

A facility for women and children fleeing domestic violence, where four people died on Wednesday morning, may have to move following its identification in media reports.

Annmarie O’Brien (27) and her daughter Paris (2), as well as Holly O’Brien (3) and Jordan O’Brien (4), died in a fire in an apartment in a step-down facility for women and children, run by the Sonas housing body in Clondalkin, Dublin.

Holly and Jordan’s mother, Brigid “Biddy” O’Brien, who had been visiting Annmarie O’Brien on the night of the fire, suffered extensive burns and remained in intensive care yesterday.

The apartment was in a housing complex widely identified in news reports. Domestic violence refuges and step-down facilities such as this one guarantee to protect the privacy of their residents, for their safety and for therapeutic reasons.

There are now concerns that families’ privacy may be compromised as the complex becomes known as a facility for women moving on from domestic violence.

Fiona Ryan, chief executive of Sonas , said she and her staff would have to “review everything” next week.

“Right now we are in support mode, in a situation of coping and holding.”

She said 29 individuals – women and children – were living in the complex at the time of the fire. She said three of the adjoining apartments had to be evacuated on the night of the fire and their occupants had not been able to return. These families were being accommodated elsewhere within Sonas services.

“We have had an awful lot of offers of help, from our sister services, from homeless services, from Traveller organisations. In time there is going to have to be a multiagency response, including from statutory agencies.”

Other families remained in the complex and were safe, she said. The complex is fully equipped with CCTV and other security measures.