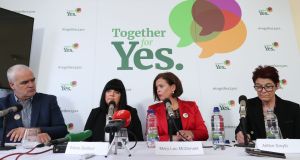 A mother whose daughter took abortion pills at home in Ireland has spoken out ahead of Friday’s referendum on the Eighth Amendment.

Elaine Bedford said her daughter Kate had ordered the pills when she became pregnant just months after being seriously ill in hospital.

She said Kate, who was 25 when she took the pills two years ago, had type-one diabetes and polycystic ovaries and had been told by doctors never to have an unplanned pregnancy, but had fallen pregnant despite taking the contraceptive pill.

Speaking at a Together for Yes press conference in Dublin on Wednesday, Ms Bedford said she had been in work when her daughter had taken the pills but had gone home after her daughter messaged her about it.

Ms Bedford said she had wanted to call a doctor but her daughter told her not to.

“This went on for hours – it felt like days. I couldn’t do anything. I was watching her blood sugars. It was just heartbreaking. It’s not something I want any mother in this country to ever have to witness,” she said.

“I can’t stand back, at this stage, and let any woman look at that fear in her daughter’s eyes.”

Ms Bedford said her daughter got married last week and was now planning to have a baby.

“She really wants a child but she wants it to be born healthy. She has every right to want that for her child.”

Friday’s referendum will ask voters whether they want to repeal the Eighth Amendment, which prohibits abortion.

“I think for lots of people it came as news maybe that such pills were available, that they were being imported, that they were being consumed by women and girls with absolutely no medical supervision whatsoever, in secrecy, in silence and with a fear of potential criminal sanction,” Ms McDonald said.

“I think today by Elaine telling her story, Kate’s story, it actually makes that situation all the more real.

“This is the reality. This is another harsh, cruel reality of the Eighth Amendment and on Friday we will have a big opportunity to put that right.”

Barrister and Irish Times contributor Noel Whelan said he had defended people in court who faced 10- or 12-year sentences for “heinous” offences.

He said getting rid of that absurdity required a Yes vote on Friday.

He added that, as a matter of law, nothing could be done about the “hard cases” such as Kate and Elaine’s unless those lines in the Constitution were deleted and politicians were given the power to change the laws.

Asked about Sinn Féin TD Peadar Tóibín arguing for the No side in the referendum debate on RTÉ on Tuesday night, Ms McDonald said he had not been representing the party.

Coronavirus virtual funerals: 'It’s not the same... very difficult to process' 02:05
Beyond the call of duty: Community gardaí help woman move her mother to safety 02:03
A doctor writes: Where are all the non-Covid-19 patients? 02:02
‘No point’ in coalition with FG-FF without two smaller groupings 02:00
Gardaí expected to upgrade investigation into man’s death to murder inquiry 01:45