Fintan O’Toole: We have returned to 1913 conditions - families living in a single room 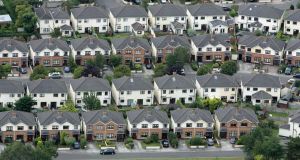 ‘If the market couldn’t solve a housing crisis when we were building at a rate scarcely ever matched in any country, it is never going to do so.’ Photograph: Frank Miller

The headline says: “Government rejects Commission of Inquiry over Irish housing.” The subhead adds: “Widespread criticism over failure to deal with housing crisis.” It’s not from last week. It’s from RTÉ’s Century Ireland website and the date is November 5th, 1913.

I could go on but you get the point. I once worked for the Daily News in New York where, legend had it, the headline “Judy Garland takes overdose” was kept in permanent readiness by the typesetters. For well over a century, Irish typesetters must have done the same with “housing crisis”. And this raises the question: if a crisis recurs again and again is it really a crisis at all? Is it not, rather, just the default position, the norm. A crisis, properly speaking, is a moment of breakdown that leads to a resolution. We have no resolution. We’ve had a revolution, a civil war, two World Wars, a new State, the declaration of a republic, membership of the European Union, the Celtic Tiger. Nothing has changed the reality that this is a society that refuses to accept a duty to decently house all of its citizens.

And there’s a basic reason for that. We have periods in which a sense of shame becomes intolerable and we build public housing on a large scale. But these are periods of remission in a chronic disease. The old fever breaks out again, the delusion that the market – if it is properly incentivised – will provide housing for all. And we default to the norm, to the crisis that is not a crisis but an ideological choice.

Indeed, one of the constants over the last century, alongside declarations of a housing crisis, is sane people crying out in frustration that the commercial market will never house poorer people. In 1930, we can find the current government’s political ancestor Richard Mulcahy declaring as the responsible minister that “the building industry must build the houses, and not the State”. And we can find Thomas Johnson, who wrote the superb Democratic Programme adopted by the first Dáil in 1919, wondering how Mulcahy, once a highly effective revolutionary, had become so passive: “He is approaching the problem in a laissez-faire manner, leaving the industry to carry on in a lackadaisical, careless fashion, not caring whether the houses are built or not, entirely oblivious to the necessity for organisation and without that initiative and pressure which at one time he thought so necessary in another walk of life.”

The market myth was exposed in the crazy boom years. We had a frenzy of private housebuilding. Houses were going up like balloons at a children’s party: at the height of the madness, we were building 90,000 a year. Prices were a developer’s fantasy: between 1994 and 2005, average house prices in Dublin increased by a scarcely credible 328 per cent. But there were still huge numbers of people homeless or inadequately housed.

In 2006, when the boom was at its boomiest, 43,700 families were on local authority waiting lists for social housing, 43,500 were receiving rent supplement payments, often for grossly substandard accommodation, and in all 236,000 people were unable to access private housing without public assistance. If the market couldn’t solve a housing crisis when we were building at a rate scarcely ever matched in any country, it is never going to do so.

We have now returned to conditions that were thought scandalous in 1913: families living in a single room. And we have done so because we have collectively chosen to do so. The social and moral responsibility of the State to provide decent homes for people who can’t afford to buy houses or apartments has been outsourced to the private sector. State spending on housing fell from more than 3 per cent of GDP in 2001 to 1 per cent in 2015. This is not a crisis: it’s a choice to leave poor people to the mercies of a dysfunctional private rental market.

There have been times when the State made different choices. I was lucky enough to grow up in a house built by Dublin Corporation during one of those times. As it happens, it was Fianna Fáil that was primarily responsible for that change of heart – which is one of the reasons I still feel particularly angry when I see the party reverting to the promise that the building industry will solve our problems if only it is properly incentivised. It won’t. It can’t. Until that truth is dug deep into the foundations of policy, the permanent crisis will go on.