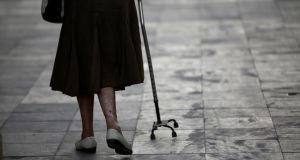 ‘People are busy and they don’t notice as much. We aren’t as connected.’ Photograph: Jose Luis Gonzalez/Reuters

Cases of older people dying in their homes and not being found for long periods are likely to become more common in the years ahead as the State’s elderly population grows, the chief executive of a charity has warned.

Seán Moynihan of Alone, which supports older people who wish to live at home rather than in care, said the elderly had always died in their homes in these circumstances, but that Irish society was now “less connected” than in the past.

“We need strategies around loneliness and isolation. Once people are disconnected, their health and living conditions deteriorate,” he said. “There is a big swing with how we deal with communities, friends and neighbours and older relatives.”

Mr Moynihan was speaking after Cork City Coroner Philip Comyn expressed concern that older people were dying alone and not being discovered for months without any alarms being raised by State agencies.

An inquest into the death of George Harrington (79), a father of five who lived alone in The Glen in Cork, heard he appeared to have been dead for about six months when gardaí entered his flat on May 14th after his son raised the alarm.

The previous week Mr Comyn had presided over the inquest of Richie Scanlan (84), who was dead for at least six months at his home in Madden’s Buildings in Blackpool in Cork when he was found on July 19th.

Mayo Coroner Patrick O’Connor this week heard the case of Irene Daly (82), a reclusive woman who had been dead in her home in Knock for three months before she was found on April 23rd.

Mr Moynihan said he believed the problem will undoubtedly rise as the population ages. Central Statistics Office (CSO) figures predict that the number of people aged 65 and over will increase from some 630,000 in 2016 to about 1.6 million by 2051.

Anne Dempsey, communications manager at Third Age, which operates a free national helpline for the elderly, said people have “different lifestyles” now compared with the past.

“If you take the post offices, where people may notice that a person isn’t coming in, well more of them are closing and pensioners will be going to post offices where they aren’t known at all,” she said.

“There is also an increased pressure on GPs. They are seeing more and more people, if you can get one at all. And it’s only about an eight-minute consultation.

“You hear things like ‘Oh, well, the person is very independent’. That independence can come at a cost.”

Brenda Barry, co-ordinator of the Cork branch of Friendly Call, a visitation and call service for elderly people, said she had noticed that those dying alone and undiscovered for months were mostly living in urban areas.

“I had a client who lived in the same place for 40 years in the city centre and people changed a lot. When she was there first, she knew everyone, and before she died, she didn’t know anybody,” she said.

“In rural areas people know what you are at. In all the cases of people being left in houses, it is mostly urban. People are busy and they don’t notice as much. We aren’t as connected. It is hard to explain how people can disappear off the radar, but they do.”