The controversial card has cost €60m but has only saved €2.5m, according to Willie O’Dea 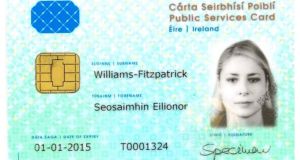 There is no evidence that the Public Services Card has had any significant impact in combating fraud, according to Fianna Fáil.

The party’s spokesman on social protection Willie O’Dea also described the card as “bad value for money” as a fraud-combating measure.

He said the card had cost about €60 million but had only saved a “meagre €2.5 million over a number of years.”

Mr O’Dea said he suspected this figure includes people being excluded from social welfare payments that they were “perfectly entitled” to but have not produced a PSC.

“It’s not a very wise way to spend taxpayers’ money,” he said.

There has been heightened controversy over the scheme since The Irish Times reported that an elderly woman’s pension had been cut off by the department because she refused to register for the card.

Around 2.8 million cards have been issued and the Minister for Social Protection Regina Doherty has said a card is mandatory in order to receive social welfare payments.

Despite Fianna Fáil bringing in the initial legislation in 2005, Mr O’Dea said “it was brought in with a specific purpose, not to compel somebody who is obviously entitled” to benefits to produce the card, he told Newstalk’s Breakfast programme.

Mr O’Dea said he was opposed to a considerable change to the Bill, introduced in 2013 where a new section was inserted by then Minister for Social Protection Joan Burton.

Mr O’Dea explained this change gave the department the ability to request identification such as photographs and signatures from people they feel “suspicious” about before issuing social welfare payments.

He said the public concern about the PSC has been “accentuated” due to the way the Government has gone about introducing it, and the “dubiousness about the legal basis” being used to operate the card.

Mr O’Dea said he was concerned about the possibility of information being added to the card by future governments because the card was designed to allow more information to be added.

The Government has said they have no intention of adding further information to the card, such as fingerprints and additional biometric data.

Mr O’Dea said FF is going to oppose a provision to the Social Welfare Bill, presently going through the Oireachtas, to extend the number of bodies and agencies who have access to the card such as “Gardaí and certain private firms”.

“We should have a debate and the Government should come clean,” he said.

He said the Government should clarify why they’ve interpreted the 2005 legislation the “way they have” and clarify what is being stored, who will have access and what provisions are in place to ensure the safety of the data.

He said the 2017 legislation will include a section that makes provision for the extension of the card to be used as a “substitute for the identity card used with the gardaí at the moment”.

He also said there is a suggestion the section can also be “interpreted in such a way that the card can be extended for use with private firms. We certainly have to draw the line there.”

Mr O’Dea said “in the age of leaking of personal data, hacking, cybercrime and identity theft. if you centralise personal data into one particular location, questions will arise as to who is going to have access to that and what safety systems are in place” to protect the information?

A Similar proposal in the UK called the entitlement card, was suggested by then Home Secretary David Blunkett in 2003, he said.

“It generated controversy on and off for 8 or 9 years but eventually the Cameron government back in 2010 decided that it wasn’t worth the money or risk so they scrapped it,” he said.

Mr O’Dea said legitimate concerns had been expressed about the card by the Data Protection Commissioner.

Gardaí may have to wait days to interview mother of McGinley children 21:32
McGinley deaths: ‘I will always remember your three happy faces’ 21:31
Seamus Mallon funeral: ‘Farewell to a great chieftain of Irish political life’ 21:10
Woman charged over Gorey stabbing told gardaí she ‘didn’t mean for him to die’ 20:49
Opposition parties criticise under-funding of national maternity strategy 20:48