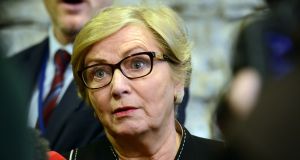 A national action plan against racism is “vital” if Ireland is to avoid “sleep walking into a racist and segregated society,” a prominent expert on the issue has warned.

Shane O’Curry, director of the European Network Against Racism Ireland, was speaking following the publication on Tuesday of a new Government strategy on integration.

The Migrant Integration Strategy, described as a “blueprint for the future” commits to 76 actions across Government, including that school enrolment policies will be monitored to ensure they are not discriminating against ethnic minorities, while local authorities are to be mandated to “reach out” to hard-to-reach migrant groups.

Mr O’Curry said the strategy was “welcome and a step in the right direction” but it was not sufficient to ensure wariness of new communities did not turn into hostility. “I see this strategy as an opportunity to start a conversation with the Department and civil society about what an action plan against racism might look like for the next five years. This would bring us into line with international best practise.”

Tánaiste and Minister for Justice, Frances Fitzgerald, publishing the strategy, said it would be “the first step towards realising the long-term vision of Ireland as a society in which migrants . . . play active roles in communities, workplaces and politics,” she said.

“Irish society faces considerable risks if integration is not supported by Government, by communities and individuals,” she said. Among the risks would be the loss of the contribution migrants can make, reduced opportunities for migrants and their families, ghettoisation and the fragmentation of shared social norms.”

Integration had become “increasingly complex” she said. “While the recent focus has been on the refugees coming to Ireland under the Irish Refugee Protection Programme, many migrants are now well-established in Ireland and have been here for some time. Every migrant and migrant family has their own story of how they came here, why they came here and how they see Ireland. The strategy needs to be sufficiently flexible to encompass all of this.”

Migrants and people of migrant origin make up almost 12 per cent of the population, she said, adding it was often the second generation migrants who find integration more challenging than their parents.

Publication of the strategy coincided with a “call out” from Minister with responsibility for integration, David Stanton, to communities across the State, to apply to a new €500,000 ‘integration fund’ to support projects that will bring migrants and Irish people together. These could be anything from a sports initiative, to a homework club or theatre projects. “Integration is for everyone and should involve everyone,” he said.

Teresa Buczkowska, who came to Ireland from Poland in 2005, said she had “a long and complicated journey” after she arrived.

“I was working in jobs below my qualification. I was struggling with my English . . . Overall my experience in Ireland has been very positive but I have also experienced racism and discrimination, racist verbal harassment in the streets . . . Discrimination and racism is one of the biggest obstacles to integration.”

Echoing Mr O’Curry, she said the issues of racism and hate crime “need a separate strategy”.