Waterford church bells to ring out against xenophobia 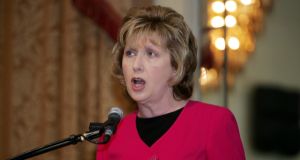 Former president Mary McAleese: “The Dean of Waterford cathedral has taken a timely, simple but profound initiative which I hope will be copied by many churches throughout Europe and other parts of the world.” File photograph: Eric Luke/The Irish Times

Former president Mary McAleese is to launch a ‘Joy of Bells’ initiative at Waterford’s Church of Ireland Christ Church Cathedral on March 19th in protest at anti-immigrant sentiment sweeping the western world.

Responding to an idea by Dean of Waterford Maria Jansson, Ms McAleese will speak at the 10am Eucharist service there and launch a ringing of the Cathedral bells at 11am in opposition to what Dean Jansson has described as “the incredible fear out there” being generated towards immigrants and refugees.

Ms McAleese said: “The Dean of Waterford cathedral has taken a timely, simple but profound initiative which I hope will be copied by many churches throughout Europe and other parts of the world.”

She continued: “The event at Waterford’s Christ Church Cathedral will take place over St Patrick’s weekend. That is not a coincidence. The name of St Patrick is known throughout the world and is synonymous with Ireland but what is not always so well known about him is that he was an immigrant to Ireland and by any standards, despite considerable personal suffering, one of the most successful in history. “The bells will be ringing a message of love, hope and inclusion that we hope will bring comfort to the men, women and children whose lives are blighted by the hatred and bigotry of those who would deny them their dignity and rights as human beings. The bells will ring out as a challenge to all Christians to honour the great commandment to love one another.”

Dean Jansson said that “as a woman and a Christian I feel we have to make an appropriate response to the cacophony of hatred which gets more frightening every day across Europe.”

In the weeks between now and March 19th the dean will be encouraging other churches and places of worship across Ireland and Europe to join with Waterford in ringing their bells in joint protest.

She recalled how “a couple of years ago a well organised fascist demonstration was set up in the area surrounding Vasteras cathedral in Sweden. As the rally began, with swastikas and hate-filled speeches, the doors of the cathedral closed and the cathedral bells tolled loud and clear over the city, drowning out the sounds of hate and racism.”

“Bells sound alarm but also a gathering of people for good. Ring out misogyny, hate, xenophobia and fear. Ring in solidarity, truth and justice. Drown the sounds of hate with the call for justice. Make a loud noise that those who are made invisible by hate will hear our solidarity. This invitation is extended to all to raise a different voice in our world,” Dean Jansson said.

“At a time when there is worldwide fear and disquiet, we will use this opportunity to peal a very different message, inviting communities at home and abroad to ring their bells on that day in protest and in hope.”