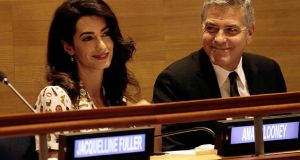 Amal and George Clooney attend a Leaders’ Summit for Refugees at the United Nations General Assembly in New York last September. She has been nominated for the Tipperary Peace Prize. Photograph: Peter Foley/Getty Images

Lebanese-British lawyer, activist and author Amal Clooney is among the nominees for the 2017 Tipperary Peace Prize.

Another nominee is Co Roscommon-born priest Fr Pádraig Devine, founder and international chair of the Shalom Centre for conflict resolution and reconciliation in East Africa, based in Nairobi, Kenya.

From Frenchpark and a member of the Society of African Missions, Fr Devine has spent 25 years helping to end conflict and poverty among tribes in Africa.

In 2009, he founded the Shalom Centre which, to date, has helped more than 30,000 people build peace in their communities.

In 2013, he was presented with the International Caring Award in Washington DC by former US secretary of state Colin Powell. Previous recipients of that award included the Dalai Lama, Mother Teresa, Senator George Mitchell, and former US president Jimmy Carter.

The 2016 prize was awarded to the then US secretary of state John Kerry.