Group aims to be a ‘permanent, citizens’ intervention in the homelessness crisis’ 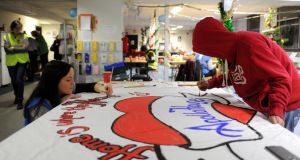 Residents and volunteers painting a sign in Apollo House in Dublin in January. Photograph: Aidan Crawley

The Home Sweet Home coalition of housing activists and homeless people received almost €200,000 in donations over a six week-period, figures seen by The Irish Times show.

The group occupied a Nama-managed building in Dublin city centre for 28 days from mid-December to accommodate homeless people. Accounts show some €189,604.75 was donated to the group between 15th December and 27th January, the vast majority through crowd-funding website GoFundMe.

The group spent €60,812.14 between 16th December and 24th January, a significant proportion on professional security services.

They offered accommodation to homeless people, arguing the building was among hundreds lying empty while thousands of people had no home. Describing this situation as “scandalous”, their action gained huge public support.

However, the High Court ruled on December 21st that the occupation was illegal and ordered HSH to leave, with a stay until January 11th. All left by January 12th. The proceedings, which had been brought by receivers Mazars, were formally struck out on Friday, February 3rd, when it was confirmed all items had been removed from the building.

Details of expenditure include €39,970 on private security, deemed particularly necessary after their undertaking to the High Court that the building would be kept secure.

They also spent €7,440.21 on heating oil, according to the accounts. Though they received large donations of food, bedding and kitchen items, other expenses included €2,926 on food, €4,715 on “operating costs” including high-vis vests, ID tags, stationery, printers and wifi dongles, and €179 on waste collection.

About 90 homeless people stayed in Apollo House over the 28-day occupation, with the majority moving on to six-month emergency beds.

Asked what would happen with the remaining funds, HSH cofounder Brendan Ogle said the project aimed to be a “permanent, citizens’ intervention in the homelessness crisis”.

Future actions and plans as to how best to use the money will be made at a conference in the Mansion House on February 18th.

“We have been blown away by the support,” Mr Ogle said. “The bottom line is, if anyone who can prove they donated money is not happy with how it is used they can ask for their money back.”