Women’s right to choose should be respected, Citizens’ Assembly hears 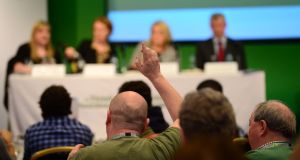 A woman has the right to decide whether or not to continue with a pregnancy because it is she who assumes the burden of pregnancy and childbirth, the Citizens’ Assembly has been told.

She told the assembly that women do not make choices about abortion in the abstract. They do so in the context of an unplanned or undesired pregnancy.

“Respect for their reproductive autonomy means respecting the choices that women or girls make in light of their values and goals and their views of the health and life risks that they feel able or willing to take.”

She suggested that the eighth amendment is against the moral principle of justice that treats people equally. It has given a right of life to the unborn that has “given rise to legislation and policies that place unequal or disproportionate burdens on pregnant women and girls living in Ireland”.

For many women with certain medical conditions, continuing with the pregnancy amounted to a “very grave risk”, so the views and choices of the pregnant women were being ignored, she stated.

In the question and answer session afterwards, Dr McCarthy, a lecturer in healthcare ethics in the School of Nursing and Midwifery from University College Cork (UCC), said she believed the eighth amendment had led to “serious health and risk implications for women who continue with their pregnancies.”

Speaking from the anti-abortion perspective, Dr Dónal O’Mathúna said the right to choose includes the responsibility to choose the right thing. “We don’t have the right (or the ability) to do what we want.”

He referenced the harm of the principle that people have the freedom to do what they want so long as they do not harm others.

“This is precisely where the freedom of choice argument break down in abortion,” he said.

“There is always an other where abortion is concerned. And by definition, that other ends up dead. Whatever opportunity or potential opportunities, the unborn might have, they are terminated totally.

“Relational autonomy recognises that we live in relationships where our choices impact others and are impacted by others.”

One facilitator said it was the unanimous view of his table that his presentation had been idealistic and that while advocating for the “weak and vulnerable” unborn, he had not acknowledged that women in crisis pregnancies are also weak and vulnerable.

Dr O’Mathúna, a senior lecture in ethics, decision-making and evidence in the School of Nursing and Human Sciences at Dublin City University, said the fact that some pregnant women are in a vulnerable position added an “additional level of complexity and challenge to the situation.

“In that case to privilege the woman over the unborn, that is not setting up a good framework to deal with those who are in vulnerable situations.”

Dr McCarthy said the essence of a pluralistic, liberal democracy was to allow people make moral choices according to their beliefs.

She said Dr O’Mathúna’s view would require her to live according to his version of the “good life”.

“My version of the good life and pluralist view is that Donal is free to live as he wishes and to espouse the values he wishes. I am too. My understanding of autonomy is to leave room for these differences and not to compel each other to live to some perfect formula.”