People invited to join events at over 20 locations around Ireland, and in NY, London 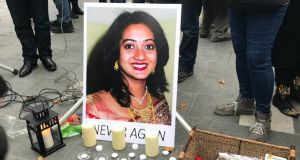 A poster of Savita Halappanavar erected on O’Connell Street, Dublin, during a vigil in her memory today. Photograph: Áine McMahon/The Irish Times 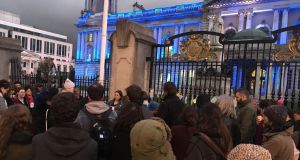 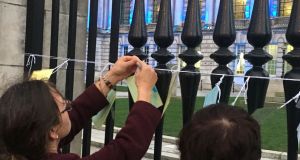 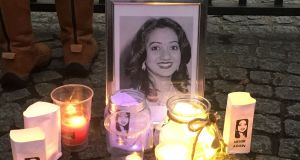 “Never again” was the headline term used at vigils in Dublin and Belfast today to mark the fifth anniversary of the death of Savita Halappanavar.

Ms Halappanavar died aged 31 on October 28th, 2012 at Galway University Hospital, one week after she presented with back pain and was found to be miscarrying, 17 weeks into a pregnancy.

Although the pregnancy was not viable, her requests for termination were refused because there was a foetal heartbeat. She then contracted sepsis and died of multi-organ failure and septic shock.

Several hundred people attended a silent candlelit vigil in Dublin, an event with no political speeches.

A timeline from the point when Ms Halappanavar entered Galway University Hospital until her death was also read to the crowd, who were told deaths like hers should never happen again.

Aoife McArdle from Dublin, who attended the vigil with her daughter Clara, said: “I’m here today because I don’t want’t to see a death like Savita’s happen ever again. I was pregnant when Savita died so it was particularly emotional for me.

“I think I was particularly struck at the comments by professors at the recent Oireachtas committee hearings on the Eighth Amendment. I have never been to a vigil before, but I was so struck by their comments about the issues surrounding abortion in Ireland that it makes me want to remember Savita even more.”

In Galway,a medical consultant and close friend of Ms Halappanavar questioned the religious influence on State- funded hospitals at a commemorative vigil on Saturday night.

Orthopaedic consultant Dr CVR Prasad said patients were constantly being reminded that they must “respect religion before medical ethics” by the presence of priests and religious iconography in hospitals.

“Even if there is a cardiac arrest and someone dies, the priest is among the first there…why should State-funded hospitals paid for by the taxpayer have such religious influence,”Dr Prasad said.

The influence of the church on the State and Constitution was a “clear” cause of Ms Halappanavar’s death, he said.

The choice to have a termination in pregnancy should be the mother’s, and “not the State, or the church or Joe Soap walking on the street”, he said at the vigil attended by some 200 people.

Dr Prasad, who provided support to Praveen Halappanavar after his wife’s death, was among several speakers and artists invited by Galway Pro-Choice to attend the event, close to the Galway market area.

Musician Tracy Bruen performed a song, Fall Away, and this was followed by a reading of the timeline of events from leading up to Ms Halappanavar’s death.

Poet Sarah Clancy expressed her sympathy to Ms Halappanavar’s family and friends, and said she hoped that the anger expressed by many after the dentist’s death was not disrespectful, but served as an energy that could be used until the law changed.

In a poem entitled Women This State Hates Us, Ms Clancy spoke of how:

“Even death doesn’t end it,

and deep down we always knew this:

we knew the Kerry Babies

we knew of lonely deaths on wet days in Granard

and the fortunate amongst us, the ones with resources know what ferry terminals

look like at night time and how much it costs

to raise a child in all sorts of currencies,

we know if we are or aren’t up for it

there should be no shame in that…”

“Never again” was also the message from the candlelight vigil outside Belfast City Hall, organised by Alliance for Choice and the Belfast Feminist Network to mark the fifth anniversary of Ms Halappanavar’s death.

Women’s reproductive rights activists gathered at 6pm to reflect on Ms Halappanavar ’s life and sign cards with messages of support for her family.

BFN member Elaine Crory (37), a lecturer from Cavan living in Belfast for the last nine years, said: “The Taoiseach needs to listen to people who have been in the position to need an abortion, including people with much wanted pregnancies and people who have had to make the decision to have a termination, to ensure they can look after their existing children to the best of their ability.

“Listening to first hand testimonies shows over and over again that being pro-choice can be pro-family.”

Queen’s University Belfast Medical Students for Choice member Jill McManus (21), from Carrickfergus, said: “Abortion isn’t an issue for people or anyone else other than the pregnant woman or person to be making, it’s a healthcare issue.

“It’s a personal choice people need to make. I think they need to trust women to make that decision for themselves.”

Danielle Roberts of Alliance for Choice said: “While the Eighth Amendment severely restricts access to abortion in Ireland, its reach goes far beyond this and impacts maternal healthcare in many circumstances, overriding the right to consent to or refuse treatment.

“This is evident in Savita’s circumstances, where the Eighth impacted someone with a much-wanted pregnancy, ultimately resulting in her death.

“Five years on from Savita’s death, Taoiseach Leo Varadkar has announced that a referendum will be held in 2018 on the Eighth Amendment.

Members of the public were invited to join similar events at more than 20 other locations around Ireland including Cork, Galway, Donegal, Belfast, Kerry, Limerick,Clare, Donegal and more. Vigils were also taking place in London and New York.

The Oireachtas committee examining Ireland’s abortion law agreed earlier this month that Article 40.3.3 of the Constitution should not be retained in full.

The Eighth Amendment, which inserted the article into the Constitution in 1983, guarantees to protect as far as practicable the equal right to life of the unborn and the mother.

A referendum to repeal the amendment is to be held next year.

1 Coronavirus: More ‘striking’ evidence BCG vaccine might protect against Covid-19
2 Genetics shed light on origins of Irish strains of Covid-19
3 Coronavirus: 16 more people have died in Republic as public urged to ‘have patience’
4 Irish doctors on getting Covid-19: ‘In 90 minutes, I deteriorated quite rapidly’
5 Coronavirus now under control in Norway, says health minister
Real news has value SUBSCRIBE