Ibrahim Halawa comes home: ‘Every day in prison I would imagine this day’

Freed Irishman vows to help innocent prisoners around the world 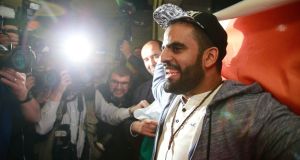 While all about him the media were losing their heads, Ibrahim Halawa held his. As the lift doors opened at Dublin Airport and he faced the scrum, Halawa and his father, Imam Hussein Halawa, Minister for Youth Affairs Katherine Zappone, and the Irish Ambassador to Egypt, Seán O’Regan, were confronted with a battery of flashing cameras and reporters advancing with microphones. He was so happy to be home, so thankful to everyone who helped him, even “the haters” who had made him stronger. And he was full of purpose.

He said he is going to help innocent people behind bars around the world – “not just in Egypt” – to get them released. He will campaign for “Irish people, even if they’re criminals”, to serve sentences in Ireland, because he knows how hard it is “being in prison away from home”, away from family. He also hopes to help the homeless and to “get my life straightened, go back to college. Thank you all so much.”

A friend from school, Peter Moloney, stepped forward, and Halawa embraced him with a “Hey, Pete”. It was the first of many, many bear hugs.

Imam Halawa was drawn back to a safer place while Zappone, who seemed about to be trodden underfoot, insisted she was fine. The Government is here to support Ibrahim Halawa “every step of the way”, she said. “He and his family are extraordinary. They’re an inspiration to us. Today is a day to celebrate his coming home.”

A Tricolour over his shoulders, Halawa called out, “Where’s Lynn? Lynn Boylan?” The Sinn Féin MEP was behind him. He turned and embraced her. “Thank you so much, Lynn.” She wiped away a tear. In December 2015 she visited him in prison but was later twice refused access. She played a major role in 566 MEPs’ calling for his immediate release in the European Parliament.

Halawa thanked the Government of Leo Varadkar. “The Taoiseach has done a lot of hard work. The Embassy back home have really worked hard to get me released, and I really appreciate that so much. I am very grateful. It’s a dream come true. Every day in prison I would imagine this day, how it was going to be. It’s what made me go forward.”

He asked the media to let a man through. “He’s my best friend.” They embraced, and Halawa, referring to his friend’s height, said, “I left him shorter than me.” Seeing a nephew, he said, “I left him a baby.” He has “all these new nephews and nieces I have to catch up on”.

The media pack moved in a ruck that almost swept Seán O’Regan aside. The ambassador laughed. “It’s a great occasion, great to see Ibrahim home, really nice to see him united with his family.”

Halawa was embraced by a succession of staff from the mosque at Clonskeagh, still thanking everyone and repeating “It’s crazy” as photographers lined him up in front of the Tricolour with his father.He sent the shutters into overdrive when he picked up a little girl, his niece, and threw her into the air. She was not able to walk when he last saw her, he said.

Asked about food, he said he had eaten a lot since his release, last week, but was looking forward to fish and chips. Not to mention a bed. “I look forward to the future; I can’t forget the past,” he said. “I’m happy that I’m home, but I’m sad that I’ve left a lot of innocent people as well. They were my prison inmates.” He is writing a book. “I’ve written a lot of it.”

He thanked all the Irish people and those “all around the world” who had written to him in prison. He thanked both the media “who had stood by me” and the people who did not. “I really want to thank the haters as well. They made me stronger and ready for everything. Sticks and stone may break my bones,” he said. “It’s just great to be back. I’m very happy – very, very happy.”