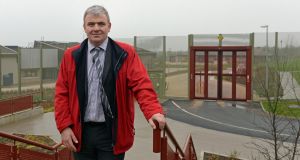 The survey, the first of its kind at the campus, was conducted in the first three months of this year.

“The data highlights the level of adversity and trauma young people have experienced, including the loss of parents, neglect and abuse and multiple care placements,” it says.

Oberstown detention centre, near Lusk in north Dublin, accommodates children aged 13-17 from across the State, sent there by the courts. They are either on remand or have been sentenced for offences.

The campus was in the news earlier this year as a number of the young people took control of buildings, and staff took industrial action concerned for their own safety.

Some 69 young people, all male, aged 14-18 were detained in Oberstown between January and March 2017, the period of the survey.

Almost one third (32 per cent) were on prescribed medication for a mental health issue and 38 (55 per cent) had a “mental health need”. Of these 38, a total of 22 had a past or current diagnosis of Attention Deficit Hyperactivity Disorder (ADHD) and 17 were classified as having child protection concerns.

Some 78 per cent (54) of the young people had drug and/or alcohol misuse problems, and of these 33 had mental health problems, 27 were in care and 20 were engaging in self-harm.

Just 14 per cent of them were in education immediately prior to detention and 59 per cent had either a diagnosed learning disability, or displayed symptoms of one.

Almost half (42 per cent) were considered to be at risk of abuse or neglect. Of the 29 young people in this category, 17 were in care and three had “significant involvement with Tusla”.

For 25 of the 29 young people, the risk came from within their own families.

A parent of 13 (19 per cent) of the young people was dead, and of these one had lost both parents. Eight (12 per cent) had a father currently or previously in prison, and 16 (22 per cent) had had no contact with one of both parents over a long period.

Pat Bergin, director of Oberstown said the data had been gathered to “better understand the characteristics of the young people”.

“We know these young people have complex needs and risks, which frequently require a holistic and multiagency response. This data will allow us and our key stakeholders from policymakers to partners and the public, to comprehend the origins and trajectories of our young people and inform the necessary services and interventions, which can assist them in moving on from offending behaviour.”