Ibrahim Halawa welcomed back with flowers by Catholic priest 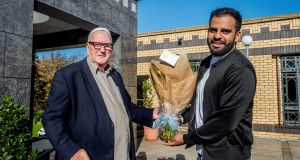 Ibrahim Halawa with Fr Seamus Fleming who made a presentation to welcome Ibrahim home after his four years in prison in Cairo.Photograph: Brenda Fitzsimons

Ibrahim Halawa said on Friday that he was “taking time off” with his mother and the rest of his family following his return from Egypt on Tuesday after four years in detention.

He was speaking at the Islamic Cultural Centre in Dublin’s Clonskeagh where he came to the mosque “to pray Friday prayer”.

While there he and his father Imam Hussein Halawa met 86-year-old Catholic priest Fr Séamus Fleming, who presented them with flowers and chocolates to mark the young man’s safe arrival home.

Fr Fleming, a Spiritan priest who spent 20 years in Gambia which has a 96 per cent Muslim majority, has been involved with inter-faith matters in Ireland for many years and learned Arabic at the Clonskeagh Centre as well as in Egypt.

He called to the mosque in Clonskeagh on Friday intending to present bouquets of flowers to Fatima, Omaima and Somaia Halawa in recognition of the campaign they had fought for the release of their brother Ibrahim. He had also intended to present them with a bouquet for Ibrahim.

Instead Ibrahim himself turned up to accept the bouquets . These were presented to him by Fr Fleming in Imam Halawa’s study and the priest also presented a box of Milk Tray to Imam Halawa. In attendance too was Dr Ali Selim, spokesman for the centre at Clonskeagh, and who had been on the trip to Morocco with Fr Fleming last year.

Dr Selim had also given the priest lessons in Arabic.

He told The Irish Times “at the moment I’m taking time off with my Mom and all the rest of the family. It’s been four years since I’ve seen a lot of them. Then, hopefully I’ll be back. There’s a lot of media contact but I’m not saying anything for the moment.”

He had come to the mosque “to pray Friday prayer and I had the pleasure of meeting Fr Séamus. It’s been great. He’s amazing. I remember him from my childhood. I used to play rugby down at Bird’s Avenue there and he was always supporting us since I was a little kid. So it’s great to see him again after all those years.”

Fr Fleming responded “we’re delighted to have you home.”

Speaking to The Irish Times the priest said of Ibrahim Halawa “he’s one of the nicest guys I’ve ever met and he was involved in all sport and very obliging and helpful. You couldn’t meet a nicer person. And I would say the same about his brother and sisters.”

Last year Fr Fleming visited Morocco with people from the Islamic Centre as part of a group of 10 Christians and 10 Muslims from Ireland. He is part of a group of retired Catholic, Anglican, and Methodist missionaries, all in their 80s, who continue to assist with development work in Gambia, mainly in medical care but which they have also supplied milling machines for grinding corn.

Mr Halawa, from Firhouse, Tallaght, in south Co Dublin, was arrested in Cairo in August 2013 with three of his sisters, Omaima, Somaia and Fatima, following protests that broke out against the military coup that took place on July 3rd of that year.

His three sisters were released on bail and returned to Ireland three months later, but he remained, and it wasn’t until four years later that he was acquitted of all charges.