Archbishop of Dublin warns against polemics and nastiness in public debate 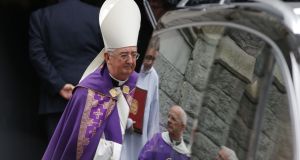 Catholic Archbishop of Dublin Diarmuid Martin has warned against “polemics” and “nastiness” in public debate. He also has said that pluralism and democracy were “never a licence to silence diverse views.”

Politics and the creation of the just society was also “neither exclusively the role of the State. Caesar is not God,” he said.

Speaking in the context of an increasingly acrimonious debate on abortion, though he does not make explicit reference to it, he said: “Truth may not always prevail in our world. The truth, however, has no need for polemics or for nastiness”.

The truth has “no need of its spin-doctors” he added. It “possesses its own power to make us free. The polemics and spin- doctoring of one side should not be responded to with polemics and nastiness on the other.”

In a homily at Mass in the University Church on Dublin’s St Stephen’s Green he said that pluralism was “not the same as secularism, but in today’s Ireland we live our faith in a society where pluralism may at times involve respectful but robust confrontation with secularism. Pluralism and indeed democracy are never licence to silence diverse views,” he said.

The believing community must be one that is based on the two virtues of “actions that work for love and which persevere in hope,” he said.

The reality was that “God is slowly being eclipsed and men and women live their lives as if God does not exist. It is not so much an atmosphere of hostility towards faith, but an attitude of indifference or one which tolerates a presence for God in the private lives of individuals but not within the realities of our society.”

There was “a real distinction between faith and politics. To deny that gives rise to integralism, fundamentalism, and false utopias. This does not mean that religious faith has no relevance for the building up of society,” he said.