Left with the blame for the sins of the past, few in Tuam want to speak openly 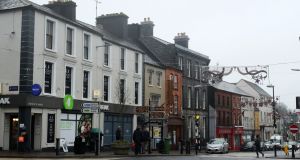 The town of Tuam in Co Galway as apologies were offered by the Government and the Bon Secours order following the mother and baby homes report. Photograph: Niall Carson/PA

Twenty-four hours after the publication of the mother and baby home report, the town of Tuam is exhausted, with few in the north Galway town wanting to speak openly.

On Shop Street, local Sean Murphy is one of the few prepared to be named, saying the townspeople are “disgusted and sad” about what took place for decades in St Mary’s, the Bon Secours-run, but State-owned children’s home

Those harmed have been left to wait too long for compassion, he said. Records and redress “should have been corrected years ago”, he says, but the government has “dragged its heels”.

The survivors should be compensated, but “I know money isn’t going to fix it. It is sad,” he says, though he wonders what good will come of a mass exhumation of the hundreds of baby remains in the home’s grounds.

“I don’t mean that in a bad way. Will they be able to do DNA? Maybe they can bury them in a proper grave,” he ponders aloud. Like others in the town, he is unsure of what is best to do next.

During the 1970s, children playing on the six-acre site of the former mother and baby home stumbled across the remains of infants who died under the watch of the nuns. Whispers spread, but they were presumed by locals to be historical remains, much older than the institution and not evidence, as later shown by local historian, Catherine Corless, that 796 children and infants had died there.

Recalling his youth, an older man remembers how the children of the home were treated “We weren’t allowed to talk to them. I always knew it wasn’t normal, but you would be scolded if you went to chat to them.”

Many in the town, says another local, want to forget and believe that Tuam was no worse, or no better than anywhere else in a time of social conservatism and the all-controlling dominance of the Catholic Church.

However, he disagrees, saying: “It is time to deal with this, fix it, get it sorted. They got a bum deal, so look after them. If digging up the site is what it takes is what it takes, but I think this is unfixable.”

Tuam, and by turns Ireland, is not unique in its harsh treatment of citizens, he goes on, though he quickly adds that that he thinks it best that he does not put his name to his “strong opinions”.

“The same thing went on all over the world. It was just what was done. It was wrong, and so was the Holocaust and the Civil War. I think maybe some people find it hard to move on.”

Sins of the past

Left with the blame for the sins of the past, Tuam, he says, is fed up: “It happened and it was terrible, but we cannot change it. Thank God society has changed now.”

Chipping away at layers of peeling paint on the pillars of Shop Street Bridge, a middle-aged man says the homes were a “national shame”, not just the responsibility of “the seven or eight towns that housed the women.

“These families came from all over Ireland, there are just certain locations where homes were built . . . It is a national problem. The modern Ireland is completely different,” he says.

However, he expresses pride that it was a local, Catherine Corless who was the one who finally brought the sins of the past into the open, even if not all in the town agree.

Looking on, Latvian-born Ray Remtnieks, who moved to Tuam in his late teens, was struck by talk of the “Tuam babies” and the “controlling” presence of the Catholic Church in Ireland after he first came to Ireland.

Every country has its dark chapters. His own grandparents were “sent out to Siberia to die” by Stalin. But still. “We heard horror stories about people being killed in war but nothing about throwing babies in a ditch,” he says.

However, he is not sure if exhumation of the mass grave will fix past wrongs: “It is horrible to see how strong the Catholic Church was here. It was controlling everybody. . . I think it is time to move on,” he adds.