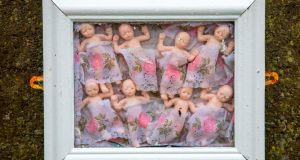 Framed baby dolls pictured at a shrine in Tuam, Co Galway, erected in memory of children buried at the site of the former home for unmarried mothers run by nuns. Photograph: Paul Fait/Getty Images

Establishing the right of adopted people to information about their birth mothers is complicated by the constitutional right to privacy for those mothers who do not want their identities disclosed.

The previous minister for children, Katherine Zappone, was reportedly told by then attorney general Seamus Woulfe, that a referendum would be needed if unrestricted access to birth information was to be given to adopted children.

However, others argue that legislation could be drafted that would secure a person’s right to their birth certificate, without having to change the Constitution.

The conflicting rights problem was considered in a 1998 ruling of the Supreme Court called IOT v B and the Rotunda Girl’s Aid Society, and MH v Rev GD and the society.

Despite having heard indirectly from social workers about the acute stress created for some mothers by the idea of their identities being disclosed to their adopted children, the commission came down in favour of adopted people’s access to information.

“Adopted people should have a right to their birth certificates and associated birth information. A person’s right to his or her identity is an important human right and should only be denied in very exceptional circumstances,” it said.

The Government and Minister for Children Roderic O’Gorman are working on a new law to facilitate this.

“If, as seems likely, a referendum is required to allow for the necessary legislation, then one should be held,” the commission said.

In its chapter on human rights, the commission outlined the views of some birth mothers who had spoken to social workers of their “terror” at the prospect of a proposed change to the law.

A letter from one woman, quoted in the report, says in part: “I was promised no contact would be made. I am in a terrible dark place with no way out. This is putting me over the edge and I pray every day that it is all a nightmare and maybe Jesus will get me out of it. Please help me, I am desperate now. I was promised there would be no contact. I have nowhere to turn but to kill myself. ”

The social workers did not argue that adopted people should not have access to their birth certificates, but rather that the mothers be given time and support as part of a structured process.

The women whose rights had been so poorly respected in Ireland during the 20th century, should not have that situation continued by way of 21st century law, they argued.

If, in a context where support has been provided, a woman was still of the view that her privacy rights are being seriously eroded, then an in-camera hearing could be held at Circuit Court level, with legal aid provide to all parties affected, the commission said.

The issue of an adopted person’s right to birth information applies generally, and not just to children born in institutions.

Also, because most adoptions since the 1980s have been open adoptions, the number of mothers affected grows smaller with each passing year.

The commission noted that many adopted people think there is considerably more information in the institutional archives that exist, than is actually the case.

It recommended that accessing the information in these records by way of the national archives law, the Freedom of Information Act and the data protection law, be better facilitated.